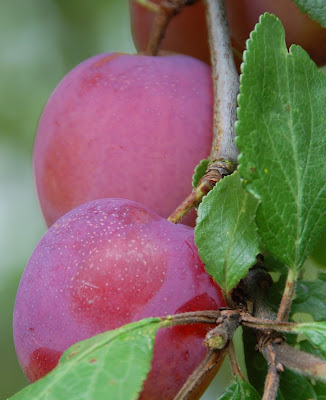 Our friend Terry Murphy once told me of a question put to him by Tamara Talbot Rice (the then widow of Caroline's cousin David, the Byzantinist). Tamara never lost the art of rolling her Rs, having been born (before the Revolution) of Russian parents.

"Do you suffer from the tyranny of fruit?" she asked, making "tyranny" sound like a cat's purr. Well, our Victoria plum tree is weighed down with fruit this year, and it's not a time to be away from home. Each evening I run the gauntlet of the local wasp population in order to pick the plums that are ripe. And end up with red fingers from stoning the fruit. Caroline is already asking whether she has enough room in the deep freeze.

The deal as we arrived here was for builders to come and erect a bungalow at the rear of our house: they yanked out an old apple tree in order to provide the driveway. The best investment I've made was planting our two plum trees to take its place.
Posted by Martin Davis at 21:55

Caroline's cousin writes: "Re plums - deterred by the work of stoning I now freeze them whole on a tray and then bag them which works very well for plums lightly stewed."