Alas, I don't seem to be able to upload the photographic evidence, but I arrived here at teatime yesterday at the end of my cycle pilgrimage. I biked something over 200 miles, having cheated by catching the train from Oakham to Lincoln.

I was exhausted after the first two days on the road, so did a mere 15 miles from the kind Twedells to Oakham: Leicestershire is more hilly than I imagined, so this was quite enough as it turned out. And the train enabled me to reach Lincoln in time for choral evensong in the Cathedral, definitely a highlight of my journey, particularly the Tallis Lamentations. Indeed, Lincoln as a whole I found incredibly impressive: worth a longer visit.

Altogether, it's been the most wonderful weather for the trip, which has made it as much a pleasure as a penance to choose the two-wheeled route. And now I have the privilege of a Benedictine Easter Triduum to join in - and a luxurious en suite room in one of the new school houses (a far cry from my days here).
Posted by Martin Davis at 12:39 No comments:


Here I am in sunny Leicestershire, about to embark on the third stage of my journey - making for Oakham, and my first visit to Rutland. Yesterday, I had a lovely - if tiring - ride through rural South Warwickshire and Northamptonshire. I passed signs saying first, No to some crematorium; then No to HS2, and finally No to the Kelmarsh Windfarm. Community feeling is vociferously expressed in these parts!

Starting off within sight of the battlefield of Edgehill, I passed through Naseby, another famous Civil War battleground.

One minor disappointment was that I found several churches locked, which I’d like to have looked round - including the large church in the centre of Market Harborough. I did arrive there rather late, I suppose, having had the wind against me most of the day. The final stretch into Harborough was an easy spin along the Midshires Way, the disused railway line which starts from Northampton. The spooky bit was the long tunnel some three miles south of Harborough - no lighting, and plentiful puddles.

I’ve been staying with kind John and Mary Twedell, the walls of whose old house are newly clad with insulation, they already having inserted under-floor insulation. (Their electricity bill is £7 a month!)
Posted by Martin Davis at 09:43 No comments: 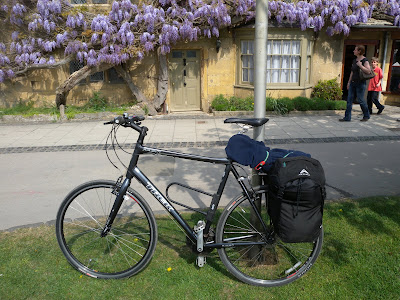 My five-day bike trip, from Cheltenham to Ampleforth, began today in glorious Spring sunshine. After mass in Prestbury, I tackled the steepest hill I am likely to encounter, Cleeve Hill, and then freewheeled down into Winchcombe, where I was given coffee by friends in their garden.

On to St Michael's, Buckland, as recommended by Simon Jenkins - a shrine of woodwork. Then lunch in Broadway, where I photographed this amazing wysteria, and on to Mickleton. St Lawrence's there is encircled with trees in blossom, and fields with frollicking lambs. Halford was a surprise: a village I'd been through many times on the Fosse Way, but beyond that containing an ancient bridge across the Stour and a host of pretty stone and brick houses. And a beautiful mediaeval Gabriel typanum over the North doorway of St Mary's church.

Traffic was mainly other bikers, motor bikes, sports cars and the vintage brigade: no lorries of course. Geese, pigs, horses I saw, but not one cow.

The best part almost was having cups of tea with two 90-year-old friends of my parents, who I dropped in on en passant - and finding asparagus for sale just before I arrived here at Little Kineton, with no present for my welcoming hosts.
Posted by Martin Davis at 21:19 No comments:

Still in training for my bike ride next week, I rode across town this evening, to a meeting about recycling - but nobody else turned up! Still, it was a fine evening and there is blossom everywhere, lining the streets. And it gave me a chance to see for the first time Cheltenham's first and only wind turbine. As you can (just) see from my photograph, it's tiny! But it was whirring round merrily, and I count it as a sign of hope.
Posted by Martin Davis at 21:03 No comments: 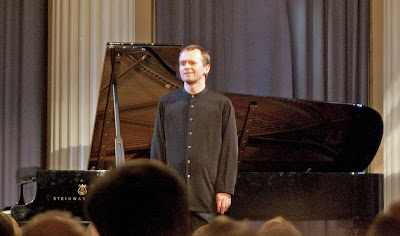 Thomas has fairly recently been at work on Steven Osborne's website, so we of course made a point of crossing Cheltenham to hear him play this evening for the Cheltenham Music Society, at the Pittville Pump Room.

And what a performance he gave! Schubert's three last piano sonatas - rarely heard together on a single evening surely (though the composer himself so performed them on one celebrated occasion). Exhausting even to listen to, let alone to play - and with what a combination of energy and finesse!
Posted by Martin Davis at 23:16 No comments: 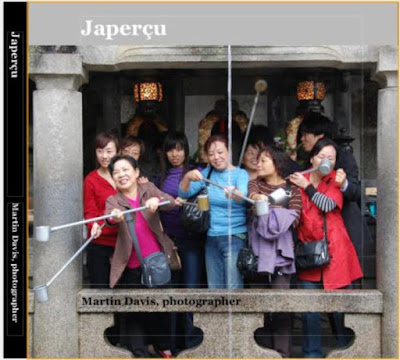 Japan has been much in the minds of most of us this past three weeks. Our daughter-in-law has just flown back to be with her family in Osaka. Caroline's recent student, also from Osaka, returned the day before. It is perhaps not a time to be far away from one's homeland, even when the affected area is far to the North.

On our 2009 visit, we travelled mainly in the central area. I have now put together a picture album with some impressions of what we saw. It's available via the Blurb publishing site, where you can also preview it online.
Posted by Martin Davis at 21:47 4 comments: