Over the Severn Vale 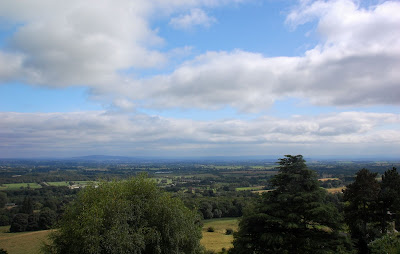 This has been a Summer's day - at last! We drove to Malvern for a walk on the Hills with our friends Margaret and David Bryer, who live high up on the East-facing slopes. The path from their house leads through old woodland, some ash and sycamore. We emerged into scrubland, and then a panoramic view over Herefordshire towards the Black Mountains. It was hazy, so we could hardly make out Hay Bluff, but the Marcle Ridge stood out clearly enough. Walking South, we skirted Pinacle Hill, pausing to look towards the British Camp and Midsummer Hill before returning for lunch on the Bryers' terrace - from where I took this photograph.

It shows the Three Counties Showground, with Bredon Hill and the Cotswolds behind. We spotted Pershore Abbey and Worcester Cathedral, and Croome church which we visited last month. A great view - but coming away we agreed that we might prefer not to live on so steep a slope: David has to take considerable care when cutting his grass not to cut his feet as well.
Posted by Martin Davis at 18:24