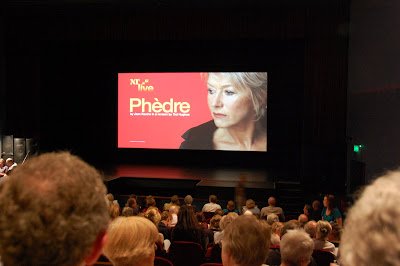 We have just come in from supper in the garden, having been to the theatre this evening. Or was it the cinema? Confusing, as the venue was The Roses Theatre, Tewkesbury; but what we saw was shown on a cinema screen - albeit a transmission of a live performance from The Royal National Theatre.

Racine's Phèdre is not perhaps the best play with which to have started the NT Live Performance experiment. Tragedies don't come very much more hysterical than this; and the alienation - to me - was palpable. It started with a cringe-making interview by a ham Jeremy Irons of poor, corpsing Nick Hytner on top of the NT building beforehand. The funniest moment of the evening - at least for the audience at The Roses.

At the end of the two-hour melodrama, perhaps a quarter of us clapped: I was embarrassed. Not that the acting in Phèdre itself was half bad: it was indeed more than half good. The set was certainly magisterial. But it's a creaky old play, and to have to sit through those long speeches in what was essentially a cinema made me at least feel pretty restless. The worst part was the lack of complete sound/lips synchronisation: this wouldn't be tolerable in a film, so why should we have had to put up with it last night, I ask.

It was though nostalgic to see Helen Mirren tackle this big speaking part, having seen her 45 years ago as that other Greek nemesis, Helen of Troy when literally a slip of a girl - naked, walking silently across the stage in Marlowe's Dr. Faustus: a defining moment in my theatregoing.
Posted by Martin Davis at 22:45 No comments: 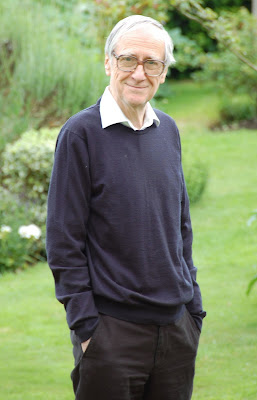 Our good economist friend David Fleming, of The Lean Econmomy Connection has been to stay. He arrived late last evening, ate a large supper (and breakfast) and left this morning for an all-day seminar at the University of Gloucestershire on the topic of Universities of Transition.

Always inspiring company, David curiously combines the role of wild prophet - he was an early Hon. Treasurer of the Ecology Party for instance, before pioneering the concept of domestic tradable quotas - with the look and feel of a reactionary: thus he will liven up your dinner party by defending vigorously Tony Blair's decision to take us to war in Iraq alongside George W. Bush.
Posted by Martin Davis at 15:18 No comments: 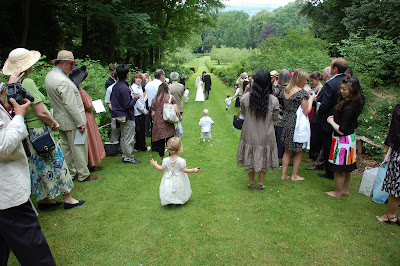 An outdoor ceremony in England during June – such as Mini and Leo planned yesterday – means umbrellas at the ready, but our daughter-in-law proved right in saying that she is "Sunny Lady:" there was only the merest whiff of rain during the post-marriage blessing and celebration in the romantic setting of Painswick's Rococo Garden. Andrew Meynell devised a beautiful liturgy: this was his Introduction:

Leo and Katsumi are really thrilled that you are all able to come to this Celebration of their Marriage, and want to welcome you very warmly to the Rococo Gardens. This is the English celebration – the Japanese version will happen in October – so it is based on a Christian service. They are very keen to help us think through the significance of what they have done in marrying each other and to open our understanding of the meaning of this relationship. They particularly want their family and friends to participate with them in this Service before we all move to the Orangery for the reception and cutting of the cake.

You, Mini and Leo, are standing in front of your family and friends as husband and wife, as you come to dedicate your lives to each other.

From very early in the Christian story, Marriage has been understood as a gift: it is a given that husband and wife may comfort and help each other, living together in need and in plenty, in sorrow and joy. It is a given, that with delight and tenderness they may know each other in love, and, through the joy of their bodily union, may strengthen the union of the hearts and lives. It is a given as the foundation of family life in which children may be borne and nurtured in accordance with God's will, to his praise and glory. This is the meaning of the marriage you have made.

Leo and Mini, you are doing more than marrying each other: you belong to one another as partners and as soulmates; and also are bringing together two families from different countries, crossing the boundaries of cultures and faiths. By your action here you are saying you are not afraid of differences, but are enriched by them; not distancing yourselves through fear but committed to working with whatever keeps you from loving one another to completion. We have a common humanity - in which we know deeply that we belong to one another; a world in which we pray and work for humanity’s well-being; where we search for its meaning and purpose; where we repent of what goes wrong, where we act to put things right, where we celebrate what goes well; it’s a world where we become more healed by being prepared to bear more for the sake of others who are less well. It is through close relationships such as marriage that we learn about trust, commitment, faithfulness and love and how we might live most fully the life we are meant to live.

St John wrote ‘God is love, and those who live in love live in God and God lives in them.’ So let us keep silence, and become aware of the deeper mystery that is the Holy Spirit here within and amongst us now.

‘Love does not come to an end.’ 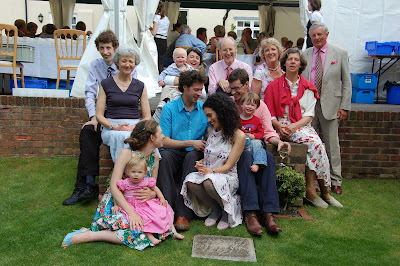 Not often do all the Davises get together, but - with one exception - Saturday last was just such an occasion, for Sarah's 60th birthday lunch. She gave us all a lovely party, with the help of friends who live down her road, who offered their garden for the afternoon. The sun shone, and Edmund made a speech - short and to the point. We saw people - non-family - we hadn't met for ages, and all ate and drank probably rather too much of Sarah's delicious food and wine: a perfect way to celebrate.

The absentee was the most recent Davis, namely Mini, who was looking after her parents, uncle and aunt, over here for a fortnight from Osaka.
Posted by Martin Davis at 22:08 No comments: 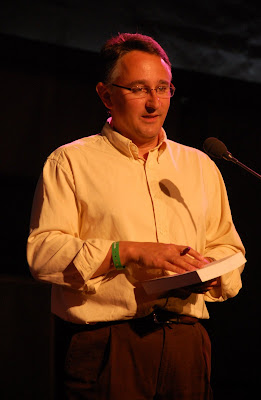 This weekend, the high-profile Cheltenham Science Festival draws to a close, and the 2009 Cheltenham Art Festival & Open Studios - a Cinderella in comparison - sparks into life. Yesterday, local MP Martin Horwood (pictured here) nailed his colours to the mast at the Science Festival, in introducing Jonathon Porritt to speak on "The Green Resurgent."

We need a dramatically accelerated change in our lives, Jonathon said in the course of a punchy presentation; that's pretty blindingly bloody obvious. He reported that one of the Nobel prizewinning scientists, who assembled in Britain recently, said 50% of the world's energy needs could come from renewable sources within 10 years if we we were to move onto a war footing: by this, he seemed excited. He also spoke of the Labour Government of the past 12 years as illiberal and authoritarian: this, by contrast, kept him awake at nights. It rather appears that all depends on who the dictator is. 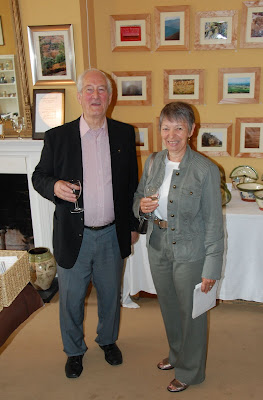 Today, Ann Sohn-Rethel and I opened our joint exhibition of pottery and photography as part of the biennal Cheltenham Art Festival. A respectable number trickled into the house to have a look during the day: one couple were refugees from a rained off bowls match, so perhaps the dismal weather helped. Takings were up on two years ago, when we also combined, but numbers were slightly down.

Cheltenham's new Mayor, Lloyd Surgenor (pictured here with his wife Ann) was able to put in an appearance, amidst a host of other engagements. Sadly it seems that the elegant chain of office was too valuable for him to risk wearing it for a visit to our house. A keen racing fan, he went away having bought a photograph of Kauto Star. The nice bit about being Mayor, he said, was having to do all those things you always wanted to do but could never quite fit in.

Ours is just one of 72 venues, open till 14th June: the Festival website has all the details.
Posted by Martin Davis at 20:21 No comments: