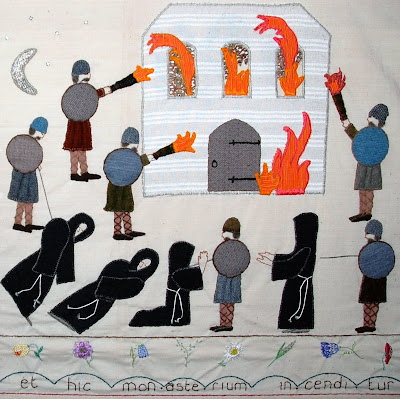 Colin and Jessica Russell generously took us out to lunch yesterday at the pub in Bredon. Very good it was too. Although it's only about 10 miles from home, and we must have driven past on the M5 a hundred times, I had never before discovered what went on in the village itself.

It seems Bredon has quite a number of houses of character, as well as the Tithe Barn and St Giles' Church - two stars in Jenkins. I photographed (see above) one of the scenes depicted in a locally-made tapestry which hangs in the nave of the church. It tells a story, along the lines of the Bayeux Tapestry. A monastery was founded in Bredon in AD 716: its Abbot Tatwin – splendid name! – became one of the earliest Archbishops of Canterbury. But in the mid-ninth century, Vikings sailed up the adjacent River Avon, burning the monastery and murdering or deporting the monks. A touchingly related tale: Burma in 2007 had its precedents.

After lunch we drove a couple of miles East. We had made an appointment to visit the garden of Overbury Court, which is in the Yellow Book. Again, we had driven past many times, but I had no idea what lay behind the high Cotswold stone wall that runs beside the road round Bredon Hill.

Until we caught sight of the enormous, partly-ornamental swimming pool in front of the house, it felt rather as if one was back in the 18th Century. Here we were, permitted to stroll in this beautifully landscaped garden, and to admire the prospects towards the Hill and Southwards to the Cotswolds. Nobody else was about – not even one of the three gardeners that it hardly surprised me to hear were needed to look after it all. 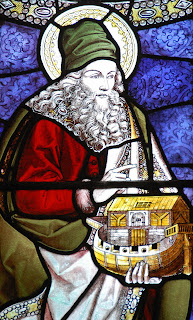 It wasn't a surprise either that it should start raining hard before we had seen it all, given what a wet month this has been. We took refuge in the pretty village church, St Faith's – an unusual dedication. It stands just alongside the garden. The narrow nave is flanked with fat, squat Norman columns, each adorned rather incongruously with what look like bedside lights. I liked the 11th Century goblet-shaped font, with strong carving. At the other end of the historical spectrum, there is Victorian stained glass with unusual subjects: Jesus stands barefoot in a garden, weeping at the death of Lazarus: a richly-clad Noah cradles his ark, which appears to be fitted with gun ports. Was he expecting Vikings?
Posted by Martin Davis at 09:26