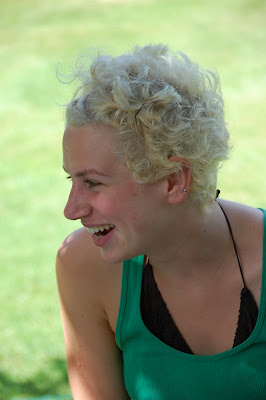 This week, we have had a stimulating visitor staying with us. Caroline's Goddaughter Lizzie is much the same age as Agnes. She didn't much enjoy her convent school, but obviously thrived - intellectually and socially - at London University.

Since then she has involved herself in education, in the broadest sense. During our conversation under the apple trees, she told us about her recent ten-day Vipassana Meditation course, and Paulo Freire's Pedagogy of the Oppressed. She described living in various London squats, and the soup kitchens, workshops and street theatre she helps set up.

She was off shortly to spend time with her sister Ellie's international charity, Firefly in its work with children in Bosnia. Apart from occasional foreign forays (France, Guatemala), she says she stays mainly in inner London. "You could cut some sweet peas," I suggested to her. Coming to us in Cheltenham, she said, was like the town mouse going into the country - and she asked me to show her what were sweet peas!

Beside the hard - at times challenging - edge to her life and work, there was a great sense of lightness and composure about Lizzie, a delightful guest. Godchildren are such a privilege.
Posted by Martin Davis at 06:39