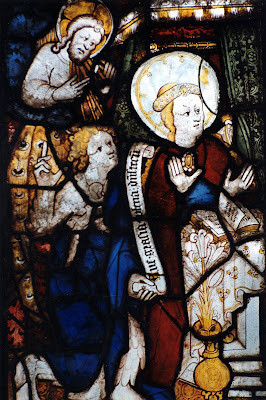 What a great day it's been today! I can't recall a drier spell of weather in March, which means I have planted all my potatoes. And to have hot sunshine as well...

I took Caroline's Japanese student round the churches of Cheltenham today, and (topically) pointed out the Annunciation windows in the Parish Church and St Gregory's, both Victorian glass. This one (right) is a much older panel in the Burrell Collection: I photographed it a few years ago. It's a far more elaborate representation, possibly German. Unusually, God the Father is himself visible top left, that link between creation and redemption again.

As someone wrote recently, The Annunciation is logically the most important feast day in the calendar: without it, there would be no Nativity, no Easter.
Posted by Martin Davis at 22:19 No comments: 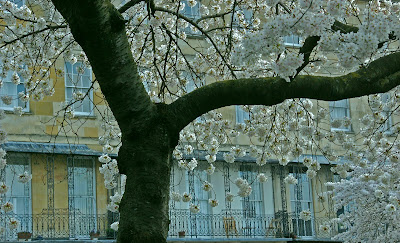 Appropriately, seeing as it's the week of the equinox, our photography tutor set us - for homework - the task of taking a seasonal image. So yesterday I biked down to the town centre and braved the traffic buzzing round Berkeley Place, so as to try to capture the blossom without also including cars or signage. (I am not really ever going to master post-production zapping, I have begun to realise.)
Posted by Martin Davis at 22:18 No comments: 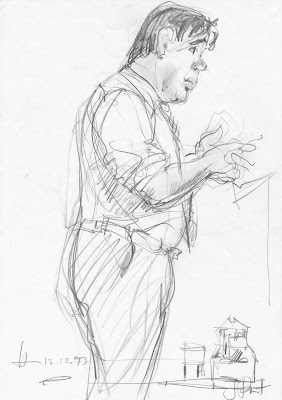 The programme for the Cheltenham Science Festival came today. Unfortunately, we are going to miss it all this year, as we shall be in Portugal meeting up with Thomas. A pity, because it is full of good things, including a talk by Festival regular Jonathon Porritt on "The Limits of our Planet". One of Jonathon's earlier appearances was at our Festival of Literature in 1993, when Canadian poet Heather Spears - self-appointed artist in residence that year - sketched him.

I have dug out the sketch to publicise a talk Jonathon is giving on 25th May here in Cheltenham entitled, "A sustainable world: reasons to be hopeful". (7.30 at Friends' Meeting House, Cheltenham, GL52 2NP - admission £3: prior booking needed.) This is under the auspices of Christian Ecology Link, of which he has for long been one of the Patrons.

Did anyone hear him on Any Questions? today: excellent.
Posted by Martin Davis at 21:42 No comments:

Gold and the gospel 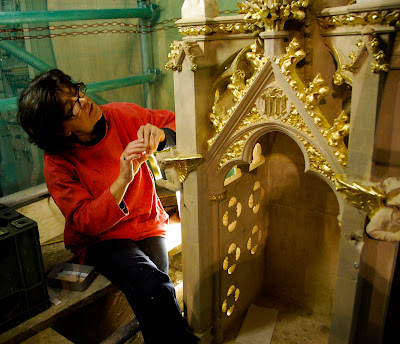 Expert gilder, Teresa Llewellyn is currently at work applying gold leaf to the tabernacle on the high altar of St Gregory's Church, Cheltenham. A very skilled job it is. "Can you see," she asked me, "the tiny animal head gargoyles? Unless you are up here on the scaffolding, they are invisible."

Teresa's work involves removing from the elaborate stonework the grime of ages and gold paint (of the 1970s), before she applies an incredibly thin layer of gold leaf, one of which she is holding in my photograph. A parishioner has given money to the church specifically for this purpose - some £10,000 or more I understand. It raises again the question asked by the disciples of Jesus, when a woman anointed him with a jar of very expensive ointment, "Why this waste? This ointment could have been sold for a high price and the money given to the poor." (Matthew, 26)

I don't know what today's answer sounds like, but I do think any expenditure of this level needs discussing within a parish community before it's embarked upon. It might even lead to the eventual decision to refuse an earmarked gift, if it was determined not to be right to be spending such a huge sum on what is essentially an unnecessary decoration. God knows there is enough real need in today's world!
Posted by Martin Davis at 07:49 6 comments: 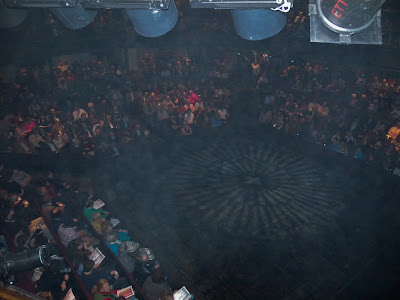 We were treated to an evening out on Monday - Romeo and Juliet at the just-reopened Royal Shakespeare Theatre at Stratford. From my tour last December, I knew already how extensive the rebuilding has been. And very impressive it is also for its main purpose of presenting Shakespeare! My seat was in the back row of the Circle right at the side, no distance from the stage. The balcony scene took place just below me, and it mattered not at all that I couldn't see the back wall. Possibly, though, I wouldn't wish to sit any higher up.

The exhilarating production by Rupert Goold disturbed me, though it clearly entranced the Worcester school party alongside me. Goold deliberately alienates us with a mixture of period and modern dress, and an unconventionally plain-looking (grunge being their motif) pair of lovers. His cast throws away many beautiful lines, or plays them against their normal dramatic sense. The programme book contains just a couple of essays, on martyrdom and suicide, which threw little light for me on the production's values or its intended relationship to previous interpretations.

Altogether, the evening lacked a sense of history, which for the reopening of such an historically important place of theatre was disconcerting.
Posted by Martin Davis at 17:52 No comments: 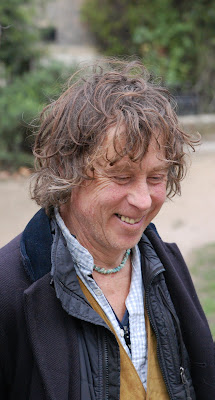 Polonius’ advice to his son was, “Beware of entrance to a quarrel.” So, it is with reluctance that I take issue with the keynote speaker at last Saturday’s Christian Ecology Link conference.

Polonius also pointed out that “the apparel oft proclaims the man,” a modern rendering of which might be “What you see is what you get.” Certainly, Father Peter Owen Jones could hardly look less like the conventional C of E vicar, and his message, too, set him apart from the norm. You don’t hear too many Sunday sermons referencing what a Druid has to say, for instance – and not once, but twice.

Our venue was St John’s Church, Waterloo. “Where,” Father Peter asked, “here in this place, is the space for herons, the food for red admiral butterflies?” As it happened, I could answer this easily: before his talk, I had strolled in the church’s beautiful garden; and there are these days many species of fish in the River Thames, just adjacent.

Yes, there’s plenty of indifference to nature within our church communities. And we do need reminding of the reason for Christian Ecology link’s existence. I liked the image of CEL as the pill dropped into the establishment’s water, still – after thirty years – relatively undissolved.

Father Peter, however, complains that there is precious little in the New Testament that relates to our treatment of the natural world. Jesus’ use of sheep, goats, sparrows and lilies of the field within his parables presumably doesn’t suffice. My objection is more fundamental, however: does he not appreciate the New Testament’s linkage between the story of our redemption and the glory of God’s creation? “It is he,” in the words of Pope Benedict, “the Creator himself, who entered into history, and can still enter into history and act in it, because he is the God of the whole and not just of a part. If we recognise this, obviously what follows is that the Redemption, what it means to be Christian, and simply the Christian faith in itself, always signify responsibility with regard to Creation.”

This is why I shall be celebrating the Easter Vigil in church, rather than by a bonfire on Firle Beacon.
Posted by Martin Davis at 17:50 No comments: 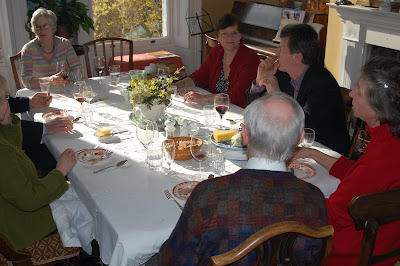 Despite being as I thought rather good at Latin when at school, I have only recently realised that carnival means "putting aside meat". Well, this is what we are going to try to do (for the first time) this Lent. So on Sunday Caroline's lunch menu featured duck (before the cheese). Sadly, however, it wasn't the birds that she had stored for the occasion in our garden shed freezer: when she went to fetch them, she discovered they had "flown": I hope the thief enjoyed his or her treat as much as we did our expensive one. Now, belatedly, we have a lock on the door.
Posted by Martin Davis at 12:11 No comments: 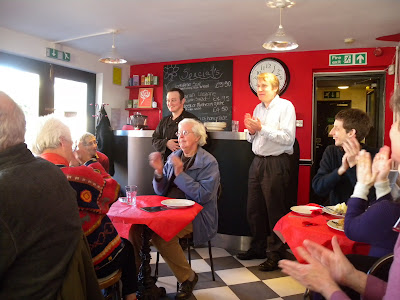 It was thirty years or more ago that Caroline and I first visited St George's Association, situated down a long drive just off Junction 13 of the M5. A delightful Sister Pauline Mary ran it - a home for educationally less able girls, who had by then become middle aged women. The huge range of buildings, complete with caged birds, was quite inappropriate for so small a community, and shortly afterwards it moved to a house in Lansdown here in Cheltenham.

The work of St George's has now changed and expanded, to include a café in the town centre, where our friend Malcolm has recently taken over as chef. Enterprisingly, he organised a special lunch today for the Transition Town Cheltenham network: a good time was had by all, and Malcolm catered for a full house.
Posted by Martin Davis at 18:55 No comments:

"Is Christianity dying in the West?" 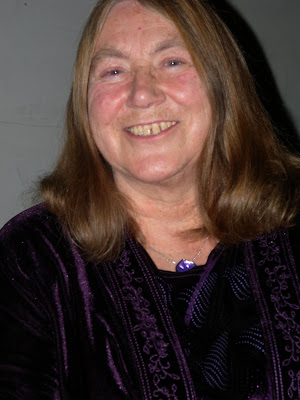 The well-known broadcaster Elaine Storkey was our stimulating speaker at the Severn Forum this evening, revisiting "the secularisation thesis". Her slides gave us a barrage of statistics and quotations, first of all to substantiate the thesis - as if we were not aware of declining church attendances. I liked the juxtaposition of a photograph of the London bus slogan, "There's probably no God..." with the cartoon of a church by a bus-stop, and its notice, "There's probably no bus so come to church and enjoy yourself a bit."

More interesting was Dr. Storkey's analysis of religious life as mutating, not disappearing. Of the 40% who are dechurched (or lapsed), more than half she said are waiting to be asked to return to the fold. Of the 40% unchurched, with no experience of worship, how many, she asks, may have a longing for God? The ways of being religious have moved into the symbolic marketplace; but how do we meet them there? Who is going to claim their baggage from the carousel?

My answer was this, with which our speaker agreed - as I knew she would being President of Tear Fund, with its carbon fast: when the church takes seriously the challenge of environmental degradation, and the need to uphold God's creation, we find ourselves very readily alongside those unchurched masses, many of whom are doing much to right the wrongs we should be talking about within our churches, but are not.
Posted by Martin Davis at 22:16 3 comments: