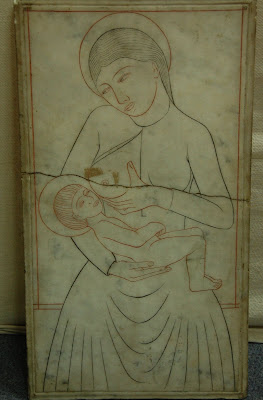 This is the title of a loan exhibition at Simon Chorley Art & Antiques, Prinknash Abbey Park. You can only catch it until 14th August though. I recommend a visit.

It was news to me that the monks of Prinknash, always rather a low-key bunch as I perceived them, possessed so many beautiful objects. But a number of the monks have been - indeed are - artists, with friends and patrons who have acted as benefactors over the years. One member of the Community (a noted potter and stone carver) was the son of the cartoonist Heath Robinson: three of his delightful paintings featuring the monks are exhibited.

Moreover, the founder of the community at Prinknash itself was it seems a devotee of the Arts & Crafts Movement. This lovely Madonna and child on marble is by Eric Gill: I loved seeing traces of the censoring hand (shades of Silvio Berlusconi's Tiepolo) which applied the masking tape to Mary's right nipple!

Gill was also responsible for the rather severe drawing of the first Abbot of Prinknash, Wilfred Upson - left, below: Abbot Wilfred seems a little less daunting in William Rothenstein's seated portrait (right, below).

The tape residue and the crack across the Eric Gill tableau say much about the state of the "Treasures". Tender love and care has at some stages perhaps been in short measure; jewel-encrusted chalices could do with a polish, and if the caption wordings were expanded, that would assist those less familiar with the whys and wherefores of ecclesiastical hardware. The current Benedictine Yearbook lists only nine priests at the Abbey now, which must be part of the explanation. And anyway today's monks might have other priorities than to spend all their time maintaining the ornaments of a past era - which ties in with the substance of my controversial post of last Monday.

Nevertheless, there is a great deal to surprise and admire. For a Monday morning, the exhibition room was pleasantly full. Had the show been mounted - as well it could have been - by the V&A, thousands - rather than dozens - would have been delighted through paying a visit. There is still time!

Thanks to Simon Chorley's generosity, all proceeds from the exhibition go to the NSPCC. 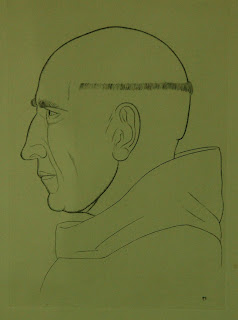 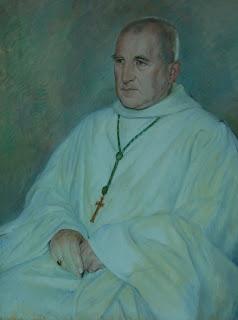