Half a century ago, almost, I was set to learn the poem of which this is the first line. It didn't mean much to me then, nor could I have told you who wrote it. But it's up in large letters at the British Museum, as part of the Hadrian exhibition. It came back to me when I was ploughing through Margaret Yourcenar's historical novel before last month's meeting of our book group; and again on Thursday, when Caroline and I visited the exhibition. It's well worth seeing: on till 26th October.

Hadrian wrote these verses contemplating his life's end, when he clearly sees the soul as departing in a different direction from the body. But where? Becoming Emperor less than a century after Jesus's crucifixion, Hadrian was relaxed about the Christians, but there is no evidence that he entertained Christian beliefs to help him answer that question.

Still less did Hadrian embrace Judaism: indeed, his harshest treatment was reserved for the Jews. On display in the BM Reading Room is a house key. It belonged to a Jew who had fled his home to take refuge (with many others) in a cave: trapped there, he was butchered to death. Hadrian's savagery contrasts with his love of beauty in so many of its manifestations. In the same way, Radovan Karadžić also wrote poetry; and Hitler loved Wagner's music.

My photograph shows Hadrian's lover, the beautiful Greek youth Antinous. He drowned in the River Nile on the day Egyptians were commemorating the death of their god Osiris - from drowning in the Nile. Hadrian had Antinous portrayed here as Osiris, suggesting that he too was reborn as a god from the waters of the Nile. 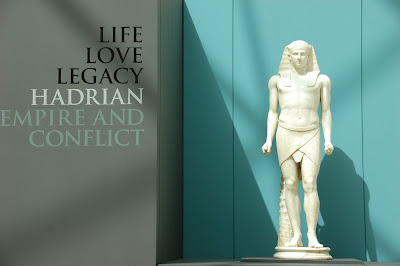 This statue was found more than 250 years ago during excavations at Hadrian's Villa, near Rome. Only last year, a huge, undamaged head of the Emperor himself was uncovered in Turkey: this magnificent object is the first sculpture you see when you enter the current exhibition. And last week I read in the paper that there were sarcophagi of the same era found, which had been buried up near Hadrian's Wall. How many other discoveries remain to be made?

PS from freeranger: I sent a link to this blog post to the schoolmaster who introduced me to "Animula, vagula, blandula". A monk, his last advice to me when I left school was "Keep the faith".

Fr. Patrick Barry OSB now lives in retirement in the Abbey of St Mary and St Louis, Missouri: though I had his email address, I hardly expected a response. Nevertheless, he has written: "Delighted to hear from you. Thank you for taking the trouble to write to a 90-year-old relic... Though no expert in such things I ventured into your 'blog' and found it rich and varied, but rather beyond my reach in the simplicity of old age... I am now fairly disabled after major cancer surgery, but still alive in mind and heart and nourished still by the prayer and faith I seem to have recommended to you."