Plastered on my birthday 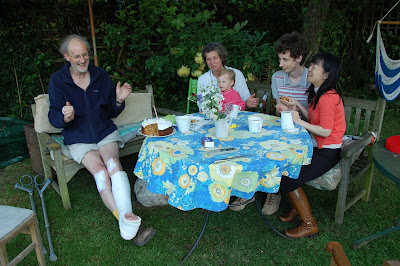 I'm sorry to report that my grand tour - see my last post Northwards Ho! - ended yesterday with a bump. On the last leg of my journey, biking home from Brackley, I was intending to head for Chipping Norton, when instead I headed into the tarmac, and to Banbury Hospital. Coming down a steepish hill at speed with a clear road ahead, my front wheel hit a pothole and buckled. I didn't know too much about what happened next.

An amazing procession of extremely helpful people then introduced themselves to me: the couple with a first aid kit in their car, and telephone (for a 999 call); the local police; the ambulance crew; a team of nurses at the hospital; Dr Ahmed; the radiographer; the Plaster Queen - and above all Caroline, who dropped everything and rushed over to be with me, drive me home (and rescue the remains of the bike from the roadside).

And so I returned home to my birthday tea party feeling rather sheepish and very battered and bruised, with possibly a fractured foot - hence the plaster. (Agnes took this picture, and also photographed the remains of my cycle helmet, see below, without which I would certainly not be writing this today.)

Oh dear, and it had all gone so well till then! After a cold, wet start from Ludlow, the weather gradually improved once I had reached Edinburgh. The cycling was glorious when I was on canal paths and country lanes - less so at the times when my route took me along the side of a dual carriageway. All but one of the 16 trains I caught ran to time. I met as planned - amongst others - some Christian Ecology Link and RCE contacts. I visited more than 20 cathedrals and churches (more counting the ones which were locked).

But more importantly (as it was the object of the exercise), I checked out most of the places where my ancestor Peter Davis had been (and which he had written about) on his travels 174 years ago. If I found it tiring, getting round his 800-mile itinerary by comfortable train (mostly) with 100 miles on my bike, then he must have been completely exhausted after his fortnight spent mainly on top of rattly coaches with 100 miles on foot! 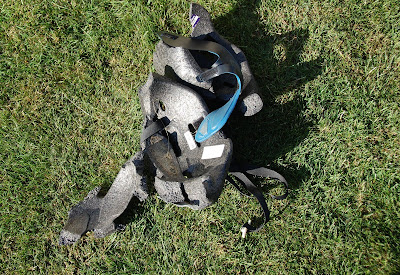 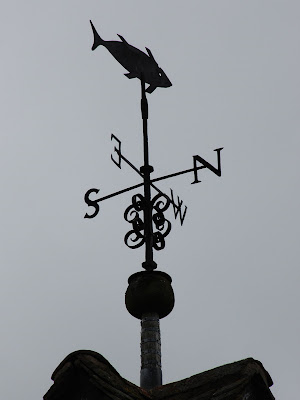 On Monday morning, I am setting off by bicycle from the Shropshire farm where my great-great-grandfather lived on a journey North. He made the same trip, 830 miles, in 1835, and wrote it up in a journal. This was later transcribed by his granddaughter, and copied to me by a cousin in New South Wales.

Peter Davis walked more than 100 miles during his fortnight, but for the most part travelled by coach. I shall try to bike the bits he walked, and then put the bike on the train. Bikes weren't available in 1835, and trains only just: he describes catching the one from Liverpool to Manchester.

So it's something of an adventure!
Posted by Martin Davis at 08:03 No comments: 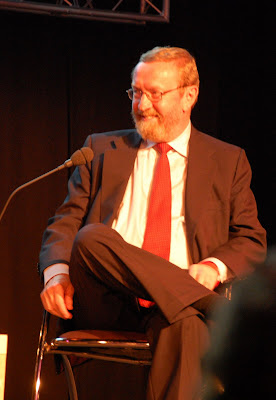 Last June, Professor John Beddington spoke at the Cheltenham Science Festival - fairly soon after taking up his appointment as the Government's chief scientific advisor. I mentioned his talk in one of my early blogposts. Last night he was back in his birth county, addressing a surprisingly sparse audience at the Oxstalls Campus of the University of Gloucestershire. His theme was The Challenge of Global Sustainability. It was a stimulating hour.

Professor Beddington listed the threats, and how they would grow over the coming 21 years - that is, by 2030. By then, the Arctic would be ice-free every Summer, and the world will need 50% more food, 50% more energy and 30% more water. A frightening prospect. His comfort? We can commission more nuclear power stations and look forward to fusion; and we can embrace GM foods. Bad news for many then.
Posted by Martin Davis at 10:28 No comments: 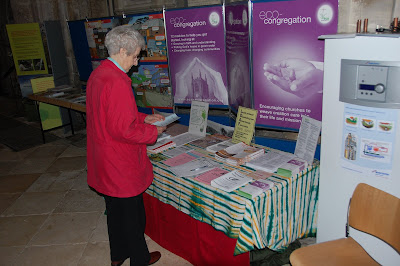 Gloucester Cathedral hosts a Future Energy exhibition this week. I've been stewarding there today, on behalf of Christian Ecology Link, which shared a stall with Eco-Congregation. There is an obvious synergy between draughty church buildings and efficient use of energy, but all the same there were not many who paused to inspect the stalls lining the Cathedral's North and South Aisles. Perhaps there will be more interest later in the week and at the weekend. I hope so, as a lot of work has gone into organising the displays.

Well done to the Cathedral for making it possible! Roy Strong would no doubt approve. Though possibly not of the other show on in the Cathedral at present: one exhibit is a life-size wedding dress made entirely of chicken skins.

Talk of transition pervades at present. My area of Cheltenham has its own version, Cheltenham Connect, which plans a big launch on 27th June. People interested meet at the Exmouth Arms in the Bath Road on Wednesday evenings between 8 and 9. There was a useful quorum for last night's session. I heard about it only yesterday afternoon, at a well-attended meeting to consider a possible Transition University (of Gloucestershire). Professor Shirley Ali Khan referred to the Transition movement, started by Rob Hopkins, as "allegedly the fastest-growing citizen movement in the UK." How do we get off our oil-addicted treadmill? How do we best use our stock of human energy and creativity to accommodate climate change? What kind of learning programme will lead to changes in behaviour?
Posted by Martin Davis at 17:00 No comments: 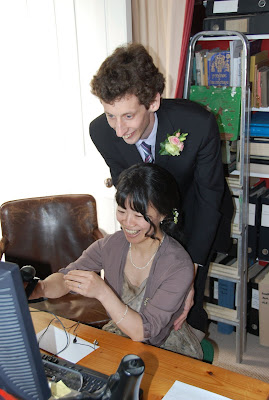 Leo and Mini were married yesterday! Here they are Skyping Mini's parents in Osaka, Mini showing off her ring. She wore lilies of the valley in her hair, and Leo sported a magnificent buttonhole. Agnes brought all her floral skills to the arrangements, which now scent the house.

As they wished, the wedding was a low-key affair, with a lunch for the immediate family afterwards. Caroline had organised beautiful food, and Leo made an excellent speech! Off they went afterwards on the bus to Burford - but for a two-night honeymoon only: we are all going to Japan in October, and Leo is saving his holiday for that.

We are absolutely delighted to have acquired such a lovely daughter-in-law!
Posted by Martin Davis at 21:44 1 comment: 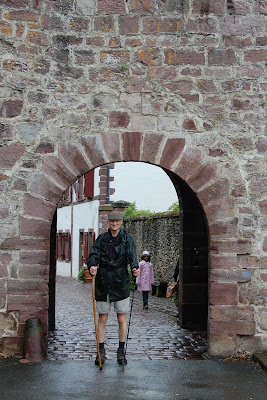 Having marked my 60th birthday year by walking the Milford Track on New Zealand's South Island, I thought it was appropriate to mark my 65th by tackling another decent walk. So I can report with satisfaction that I returned last night after completing on foot the final (almost) stage of the Voie du Puy, one of the ancient routes through France which leads to Compostela. Starting at Manciet in the Gers on 22nd April, I arrived in St Jean-Pied-de-Port on Wednesday, a bit weary and wet, but very happy after eight days on the GR65.

Perhaps the tiredness was evident: carrying my rucksack and staff, I was offered a seat in the tube from St Pancras to Paddington yesterday evening by a woman to whom I would normally have offered mine. (I said I was fighting fit, having just returned from a 200km walk: she replied, "So I should think you could do with a sit down." Nevertheless as a matter of pride I declined her kind offer.)

MD65, GR65 and A65: during my walk, I trespassed for a couple of kms along the as yet unopened A65 South of Aire-sur-l'Adour, the construction of which has usurped pilgrims from their direct route: a long detour is now indicated, which I wanted to avoid. But my comuppance arrived with misdirections from a trio of the roadmakers on their return from lunch, towards a path ending in a tangle of fallen trees worthy of a scene from The Road: the devastation caused by the February tempest in the French South-West was evident everywhere, though the GR65 was itself pretty clear of fallen timber - indeed the wayside is now furnished with plenty of wooden seating.

My French and German and a lot of smiling were just enough to get me by with the mainly French, but also German, Belgian, Dutch, Finnish, Italian etc. other wayfarers I came across: not until Wednesday afternoon did I hear a couple of others speaking English as I caught up with them on the final stretch - and they turned out to be Norwegian and Portuguese respectively.

In previous years, Caroline and I had walked stretches of this Chemin du Puy together. It is different altogether doing so on your own, however many others you come alongside. I am still trying to distill the experience, with the aid of the photographs I took and many good memories.

Whilst away, I read - and can recommend - Kevin A. Codd's To The Field of Stars: A Pilgrim's Journey to Santiago de Compostela, published by Wm. B. Eerdmans last year.
Posted by Martin Davis at 09:39 No comments: