Freedom in The Suffolks 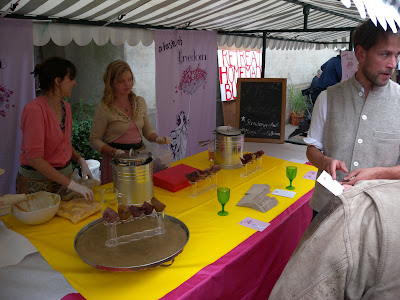 For once Cheltenham has had a dry late May Bank Holiday Monday this year. And The Suffolks were thronged with happy-looking people, strolling along, people-watching, enjoying the music - and browsing the stalls: one which caught my eye was selling fruit swirls, a sort of sorbet in an edible cup: mine was strawberry and yogourt flavoured - rather delicious.

"A taste of Freedom" was their slogan, and the name of a new social and environmental venture, intercepting fresh yet unwanted fruit before it rots - 20 million tonnes of it are said to be wasted annually in the UK. Tristram Stuart, on the right of my photograph, is behind it: his book, Waste: Uncovering the Global Food Scandal, was published by Penguin last year.
Posted by Martin Davis at 19:27 No comments:

The music festival season is upon us 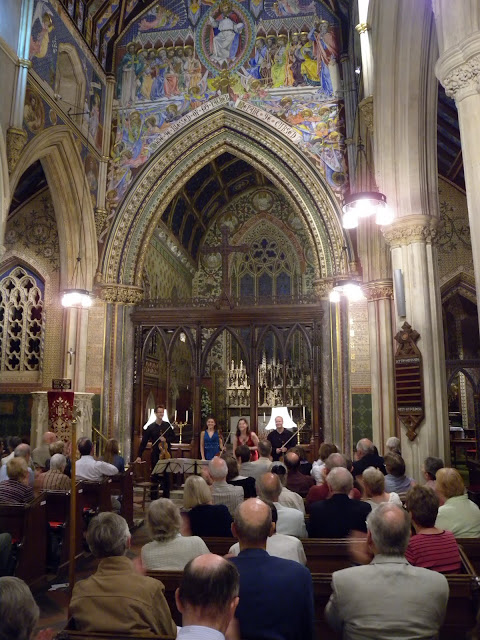 We were at Highnam yesterday on a sunny evening for the opening of this year's Carducci Festival, a glorious event! The young and engaging Carducci String Quartet have been putting on an intensive weekend of music-making there each year since 2007, and people respond. No wonder! The setting is perfect - a much-loved Victorian Gothic church amidst parkland; the quartet's programmes are imaginative, and the playing both rich and delicate - absolutely no gothic horrors.

An interesting contrast was the recital we attended on Wednesday night, as part of the Newbury Spring Festival. St Mary's Church, Kingsclere predates Gambier Parry's Highnam by 700 years, and for a performance the Norman setting feels more secretive than exuberant. The virtuosic intensity of the Trio con Brio Copenhagen's playing contributed to this atmosphere, especially in the tragic music of Smetana's G minor Piano Trio.
Posted by Martin Davis at 07:04 No comments: It was a fine day for Cheltenham's first carnival for many years. The children loved it, especially the extremely well-behaved sheep, which led the procession. More often associated with racehorses, Edward Gillespie was properly dressed up as freeman of the borough, and made a splendid Mine Host for the afternoon. He was pursued through the streets by swirling kilts (pipes and drums), and a ukelele band, amongst others.
Posted by Martin Davis at 20:09 No comments:

Walking along the wall 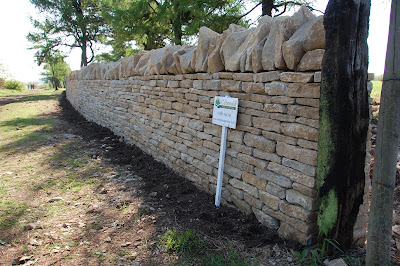 Having commented on the capital investment - mainly European Union money - on the Via de la Plata, it was good this morning to note the progress with the walling along the Cotswold Way. A stretch of new stone wall 1,300 metres long is well on its way to completion, running along the top of Leckhampton Hill and marking the boundary of Charlton Kings Common. Natural England is bearing 80% of the cost of this large project, the total bill being (as I recall) more than £600,000.

When the work is finished, Dexter cattle will be able to graze the hillside without quite so much of the rather unsightly wire fencing needed in the past. Nevertheless, to complete the Common encirclement, a further 3kms. of walling is needed.

Meanwhile, the landscape at the top of our Hill is dotted with machinery and huge piles of both old and new stone. It makes you wonder at the creation of the original boundary walls, in an era of no dumper trucks.
Posted by Martin Davis at 15:48 No comments: 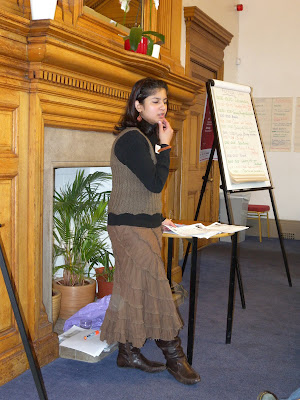 The environment as usual seems to have come well down the list of hottest election issues. And since climate change has gone completely out of fashion as a discussion topic since Copenhagen, UEA, IPCC etc., it seems opportune to have been catching up a bit these last few days.

On Thursday night, the sensible Director of A Rocha's Climate Stewards program, Brendan Bowles came down from Cheshire to speak in Cirencester, giving us a (Christian) vision of a better world with less carbon; and today, at Gloucester Guildhall, Meghna Das, Sustainable Communities Officer at Coventry, led a COIN climate change speaker training course: most useful!
Posted by Martin Davis at 20:04 No comments: 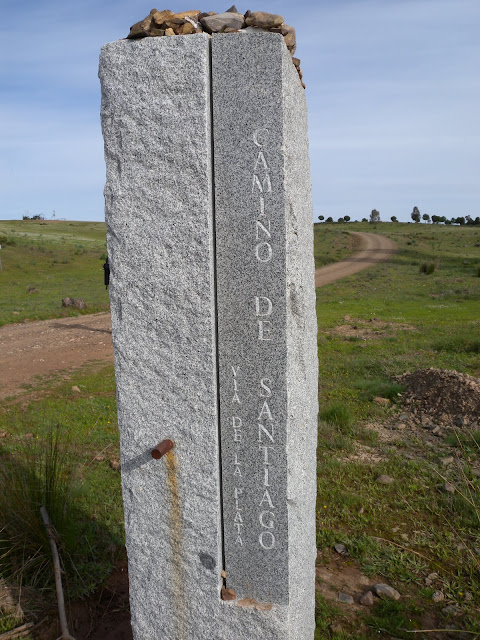 From Salamanca, we caught a train to Lisbon on Saturday last; and after two happy days there, we are now back home again - via another five trains (Lisbon - Hendaye - Toulouse - Paris - London - Cheltenham).

R.L. Stevenson wrote that "to travel hopefully is a better thing than to arrive," and, although it's nice to come home, I'm inclined to think he was right, at least so far as pilgrimages are concerned. We loved our four weeks' walking on the Via de la Plata, but are not sad only to have managed half of it. Santiago de Compostela is the focus for most of the other walkers we met, but it doesn't seem to us particularly necessary to get there. Indeed, many V. de la P. pilgrims are said to be disappointed when they arrive, such is the touristy hustle and bustle of Santiago - a great contrast to the weeks spent amidst such a stunning variety of things natural, studded with mainly small places to stay en route.

Perhaps it's different for pilgrims to Fatima and Lourdes, most of whom do NOT walk there: we passed through them both on our way back from Lisbon!
Posted by Martin Davis at 22:43 No comments: 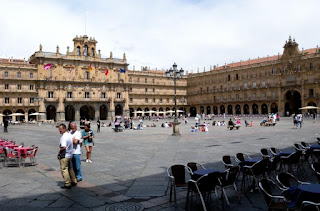 On Friday afternoon, we sat down here and celebrated the conclusion of our planned walk from Seville. The Plaza Mayor in Salamanca is said to be the world's grandest drawing-room: on a sunny afternoon, with a glass of white wine to hand, you couldn't disagree! Our only problem was that we were seated rather too near a stag party from Essex, all its members wearing sombreros and drinking large beers, their glasses not being allowed to stand empty for more than a moment.

What a great feeling it is to walk towards the cathedral towers of Salamanca, visible for a good 10kms! Modern blocks of flats only screen the old city when you reach the rather dismal outskirts, but even there we found something to wonder at: a new motorway has been built, at present unused, and in the tunnel which takes the Camino under it was a man recording his own extraordinary voice in a Basque lament!

One of you readers has been wondering about the availability of accommodation along this Camino. Did we use a guide that has this information? Did we generally reserve ahead or find places on arrival?

We were indebted primarily to the Confraternity of St. James' guide (and its web-based update), which has addresses and telephone numbers. There are various other web resources too, which we explored before we left. We found a number of places with a new casa rural, and one, in Torremejia, with a new albergue. We did book some ahead: it is not necessary, and it gives greater flexibility if you leave deciding where to stay till you get to whatever you feel is the right destination for the day. Having said this, some of the villages are many, many kms. apart, so you do at times feel glad of the security of a booking.

Huge amounts have been invested in tourism all along the route, which can "take" a much larger number of pilgrims than currently walk or cycle it: we just felt so lucky that more people - particularly the dreaded cyclists - don't!
Posted by Martin Davis at 11:40 No comments: