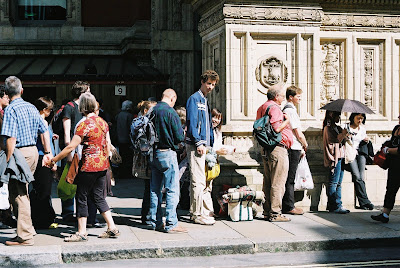 This time last year, Leo, Mini and I went to the Proms: it was Mini's first experience of the Royal Albert Hall. They both so enjoyed it that they were there again last night. Leo came to tell us about it this evening: they intend to go every year, he said, and I bet they will.

Last Thursday, Caroline and I were lucky enough to be at the Albert Hall too, invited by our old friend Caroline Holbrook, who goes frequently from her home near Newbury. That night the concert was given by the West-Eastern Divan Orchestra conducted by Daniel Barenboim. This orchestra has become an institution in less than a decade, since its founding by Barenboim and his close Palestinian friend, the late Edward Said. It inspires not just musically, but in the way it represents the hope and real possibility of a peaceful future for both Israelis and the Palestinian people. Not a yarmulke or a hijab to be seen! And the orchestra played - besides Haydn and Brahms - music by the Jewish Arnold Schoenberg together with, as an encore, the Meistersinger Prelude by Hitler's favourite composer, Wagner.

Daniel Barenboim conducted the whole programme from memory. In my early '20s, when I was an articled clerk in the City of London, my principal invited me to sit in on a meeting that a certain Enrique Barenboim had arranged with him, to discuss his son's tax position. That son, about my age, came along too: his name was Daniel. I remember nothing at all about the content of the meeting; but I have always followed from afar, and admired, Daniel Barenboim's public achievements.
Posted by Martin Davis at 21:43