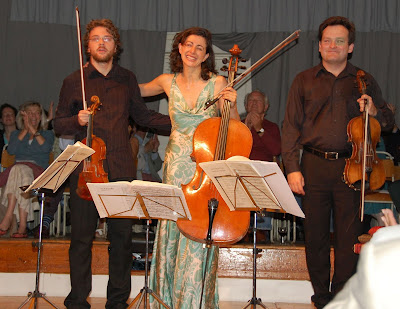 The Guiting Power Music Festival got going just before I arrived in Gloucestershire: I remember Raymond Cochrane, who in an act of amazing generosity had given much of the village away to a specially-formed charity, making a somewhat halting speech at the first Festival I attended, about 35 years ago.

It was always a pleasure - after the relative formality of the Cheltenham Festival - to go up to Guiting; but in those days it was a bonus if one managed to hit upon a performance which was satisfying musically. With Joanna MacGregor as President, however, in recent years it has gone from strength to strength. And last night's recital was the best I have heard in the charmingly unpretentious Guiting village hall.

To have the chance of hearing and seeing three young, but already world class, string players at such close quarters is a rare privilege. Under Alexander Sitkovetsky's leadership, Natalie Clein and friends gave us a superb early Beethoven (G major) string trio, and - before that - a movement from the lyrical Dohnanyi String Serenade. At the outset, Sasha teamed up with violist Krzysztof Chorzelski, violist in the Belcea Quartet, for a vibrant - the stage flowers seemed in danger of falling off their stand - performance of the Mozart Duo K423, and Natalie gave an impassioned Kodaly solo cello sonata, Op.8: quite a tough nut for the audience, not to mention the performer.

Where else could you have swings to swing on, an entire playing field to picnic in, and end the evening with such an outstanding performance? 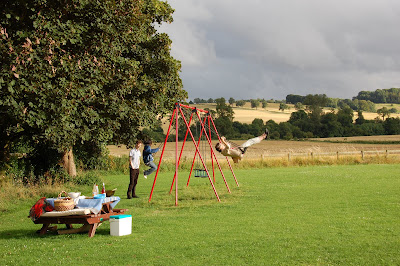