Half way on the Camino 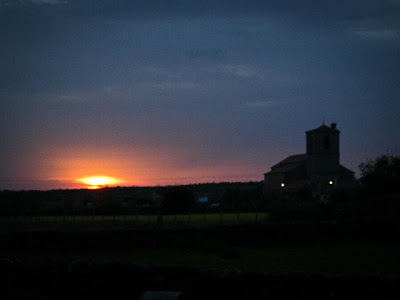 It´s 1,000 kms. from Seville to Santiago, and we are now 493 kms. along the line.  But tomorrow we bring this year´s walking to an end, on arrival at Salamanca.  It´s sad to be parting from the company of other pilgrims, and from our simple routine of the past four weeks: up before dawn, coffee and toast for breakfast, the same relatively few possessions stuffed away in the rucksack, along with plenty of bottles of water, and then OFF into the empty - and usually beautiful - countryside.

This morning´s was a particularly dramatic departure, from Fuenterroble de Salvatierra, with the sun coming up behind the fortress church of Santa Maria la Blanca.  That was the stay where we have had the strongest feeling for being on a pilgrimage: the parish priest, Don Blas Rodriguez, has done an enormous amount not only for the people of his small parish, but also for the visibility of this Camino.  We were all invited to his children´s mass at 8 last evening: he used the pilgrimage, and its international significance, as a teaching tool for his first communion class.  And as many of the pilgrims who came along may never have experienced a mass before, the celebration had a double effect.

The church was in ruins when Don Blas arrived in the village: now is it not only gloriously restored, but filled with modern, wooden sculptures of enormous dynamism, including Santiago of course, and the centrepiece, the risen Christ.  Blas´ home is the pilgrim Refugio, its dormitories filled with icons.  What one man can achieve in a short time!  Nor is he - from what we could see - subject to Mr. Darcy´s strictures:  The power of doing anything with quickness is always much prized by the possessor, and often without any attention to the imperfection of the performance.
Posted by Martin Davis at 17:23