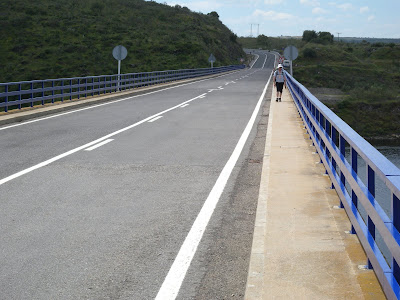 Today´s walk was a bit of a holiday within a holiday: first, it was only 14kms., and secondly our rucksacks were carried for us - the kind couple who run the place we stayed last night dropped them off, as they were driving here to do their shopping.

So, we raced along in the mild drizzle, first climbing up from the great reservoir, on the edge of which we´d stayed (amazing views!), and then gradually dipping down across more moorland-type scenery to the river below this village, Cañaveral: we crossed it on the 14th Century humpback bridge of San Benito before mounting to the village road. The main street is full of people putting up tents for a feria on Saturday. Friday is St. George´s day: I had thought he was big throughout Spain, but I was told by the barman that the feria is to celebrate 2,400 years of womanhood - with something of a shrug.

Yesterday was hot in spite of the forecast: the greater part of our walk was on the roof of the world, the track running for a long time amidst huge boulders - I have only ever seen any like them on Dartmoor. Feeling adventurous, we tried to follow an alternative route at one stage, the original Calzada Romana: a failure! It was then difficult getting back to the marked path, and our water was running low. The last 5kms. along the main road where it crosses the two big rivers which supply the reservoir were the first time we experienced the grim in pilgrimage.
Posted by Martin Davis at 15:08