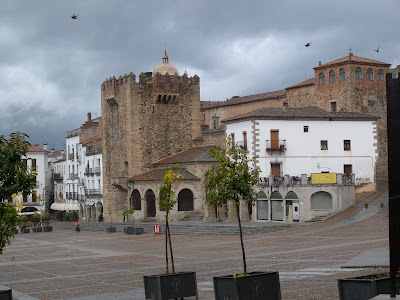 Not in accordance with our (revised) plan, we are spending two nights in Cáceres - which turns out to be well worth it! A place the size of Cheltenham, Cáceres has at its core a self-contained walled city with an extraordinary richness of architecture, mainly of the 15th-17th Centuries. More churches and palaces seem to appear as you make every turn.

Last evening, we went to mass in the Cathedral (of 13th Century origins): this morning, we toured a 12th Century Arab house; and as I am writing, Caroline is at a Rembrandt etchings exhibition. The only hitch has been our hotel: the partying continued till after four this morning outside the window of our room. As a result, we are both rather short of reading matter till the Post Office opens tomorrow morning, and we can pick up our poste restante. (Luckily, the concierge has just come up with a choice of The Warden and Bleak House, left behind by previous guests.)

We walked mainly in the dry yesterday, the only serious shower coming upon us just as we happened upon a tunnel under the motorway - the second time this has occurred. Today, the rain has been more constant, so we aren´t really complaining about another rest day.
Posted by Martin Davis at 16:47

Hola! Que tal? Great you're in Caceres! If you have time for a tea try 'Arabia Riad' in the Main Square next to Pension Carretero, its a small red building, they have a quaint garden with a pool at the rear. The museum in Plaza Veletas has a 'aljibe' a huge water deposit or well worth a look. Suerte!

We missed the cafe, but yes we saw the Muslim cistern, which is amazing!