10 o´clock shadow on the Camino 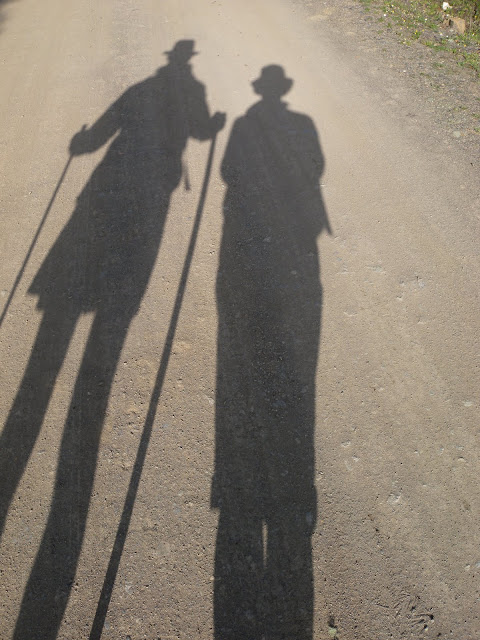 I always forget how much later it gets light in the West of Spain. We were advised to leave early on our walks, but it´s been not only cold but dark when we´ve done so, even though it warms up considerably by midday.

Here we are anyway, safely arrived at El Real de la Jara, our last stop in Andalucia, before we cross tomorrow into Extremadura. "For a thinking man there is no such thing as a wilderness," says one of Turgenev´s characters. Well, yesterday, and still more today there´s been hardly any habitation in sight either day, and no people apart from a handful of us walkers. Black pigs run wild; goats, beautiful brown, horned cattle with bells, horses (and a mule), sheep, birds of many feathers, not to mention frogs and tadpoles galore. Then there´s the flowers, which - especially yesterday - were of all colours. (Today, we have climbed higher, so fewer were out.)

But only at the end of today´s walk, that´s after four days on the Camino, did I really start to realise that it´s not a race; and so why not sit by a babbling stream and bathe our feet? After all, Spaniards lunch late, and there will still be somebody there with at least a sandwich at 3.30.

I´m glad to say Caroline is (so far) enjoying it all as much as I am (and neither of us has so far succumbed to blisters). "A far cry from Leckhampton Hill," as she says.

Time to go and have our pilgrim passport stamped at the pretty church round the corner from our B&B.
Posted by Martin Davis at 17:16