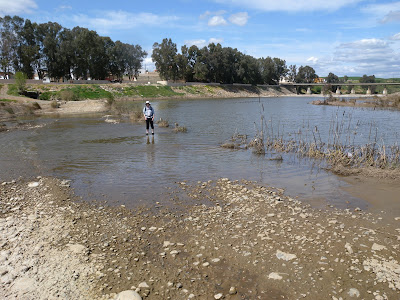 Here is Caroline, baptising her new boots in one of the rivers we had to cross today, all swollen by the terrific rains that Andalucia has had this Spring. The other side of which is the proliferation of wild flowers.

Happily, today has been fine: what clouds we have seen were nice and high, and there was a little breeze to prevent us getting too hot. That´s just as well, as it´s a dusty old track from the Seville outskirts, with no shade.

We´re staying in a hotel made from a converted farmhouse, just outside the rather nondescript town of Guillena, and were very pleased to be able to sink into a bath on our arrival here. Although we avoided the worst of suburban Seville by catching the recommended town bus, we then spent an enthralling hour walking round the remains of the Roman city of Italica: by when Caroline made the mistake of wondering whether we had finished our walking for the day; but a sharp tap with my Leki [stick] and large coffee [carrot] combined to get her back on her feet. And soon it was me that was wilting.

Holy Week in Seville is something rather different (from Cheltenham anyway): at 5 a.m. yesterday morning, I was standing outside our hotel watching 500 black clothed and hooded men with candles process past in silence, followed by an enormous float with a full-size statue of Christ carrying his cross on it (carried itself by a team of 35 willing slaves, in the dark underneath it): this and more than 50 similar progresses have been surging through central Seville all week, watched by silent and respectful crowds of thousands: an amazing tradition, preserved with vitality, and giving hope to those of us depressed by clerical scandals.
Posted by Martin Davis at 16:26