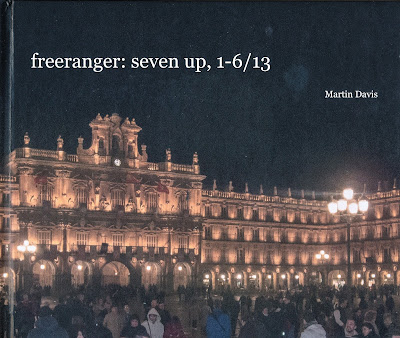 It's no doubt sad to admit it, but this retiree looks forward keenly to the courier's arrival with a package containing photobooks. Four of them were for the inaugural Transylvanian Book Festival: it starts on 5th September. Having repacked them for Romania, I trotted along to our post box, but the opening was too small. And so, to the post office, where I was asked, "What's in this then?". Well, we are after all in Cheltenham, home of GCHQ.

The other photobook that came this morning was my seventh volume of blogposts (cover as above). But I'm not too happy about the reproduction of many of the photographs. Hmmm, I'm reluctant to change publisher (from Blurb), but may just look into the alternatives.

I mentioned in yesterday's post that I had been photographing churches: that was on my Wednesday circular walk, which started at Nympsfield. Clockwise, we followed a path down and then up into Uley, climbed steeply from St Giles' Church to Uley Bury, and then back through the woods above Frocester. Six of us this week. A lovely day for it - no rain. No landscape photography as I'd forgotten to charge my camera battery.

Sławomir Mrożek died a week ago: his obituary is in today's paper. The RSC brought to the Aldwych his play Tango, "a modern-day Hamlet", as described by Michael Coveney. It followed the playwright's exposure in the same theatre with his double bill in Peter Daubeny's 1964 World Theatre Season. (I remember those long thin instruments with earpieces we were given in order to hear the translations.) The image of Michael Williams and Robert Eddison tangoing as the curtain fell still remains with me even after 47 years.
Posted by Martin Davis at 23:30