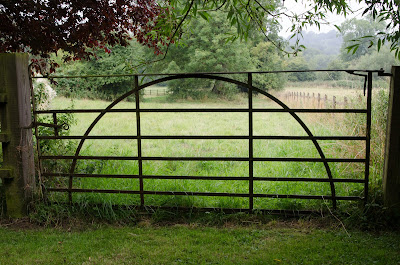 For over two decades, Glenfall House operated as the Gloucester Diocesan retreat centre. A month ago, it closed its doors. I am sad about this, having been closely involved with Glenfall from the '80s until a while after the retreat house opened.

I remember particularly the opening ceremonies on 27th June 1992, with a Eucharist presided over by Gloucester's short-lived Bishop Peter on the sunny terrace in front of the house, the gardens falling away towards fields below, full of ancient oak trees. Nuns of the Society of St Peter had been there before, and I have the memory of a frail Sister Mary Margaret, delighted to be back at her former convent home and sitting on a bench eating strawberries and cream. It's disconcerting that this comes back so clearly, at a time when I now find myself putting the red wine away in the fridge.

Before the nuns, Glenfall was the home of Mary Williams and her farmer son Anthony: they hosted the occasional Old Amplefordian gathering there, which I organised shortly after arriving in Gloucestershire in 1973. The early 19th Century villa had been radically altered a century later, with beer money. Arts and Crafts plasterwork (Peter Waals), woodwork (Sidney Barnsley) and metalwork (Norman Jewson) is to be seen both inside and out. The arch of a Cotswold stone garden grotto is echoed by Jewson's field gate, which I walked past today, at the Southern extremity of the surrounding estate.

Edgar, Patrick, Martin and I had met near Sainsbury's at 9:30 and set off parallel to Harp Hill on a misty but warm morning. I had the idea that it was possible to walk right up part of the eponymous glen (deep and steep), but we ended up just crossing it on a rickety bridge.

Though the grounds seem to be well tended, the house itself looks sadly abandoned, with plasterwork in need of repair. Just beyond the drive's iron railings, a hawk was dismembering some creature larger than itself: a bird of prey, where once there had been birds of pray.