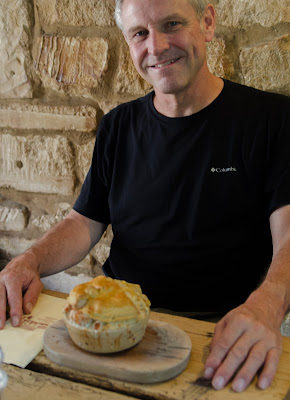 As I've mentioned, I am enjoying dipping into Roger Deakin's Notes from Walnut Tree Farm. "All that one asks of one's friends," he writes, "is that they remain one step ahead. To have them lagging behind risks plunging into banality." But how difficult it is, to retain a perspective between the trivial and the important. I was reflecting on this in the train back to Cheltenham this afternoon. In conversation, you can, if you're not careful, get as heated about England peeing on the pitch as Syria raining incendiaries onto a school playground. It's easy to forget there are always choices we can make about what we discuss.

Planning a walk from Stroud, you have basically two choices: a steep pull uphill to see something of the Cotswolds and look out over the Severn Vale, and a flat, shady trudge parallel to fairly busy roads, but with (in one direction) one of Gloucestershire's ace pubs as your goal. It is still warm and dry, but the visibility this morning wasn't great. As the two others I was meeting shared my thought that food and drink were as important as exercise, we opted for the second alternative, walking from Stroud Station to beyond Nailsworth mainly on the old railway line.

It's part of Sustrans' National Cycle Network, but we were not badly buzzed by bikes: all those that did come past had kindly "belled" us in good time. And it's an interesting walk, giving you a behind the scenes look at the area's industrial past. There are some high class graffiti in one of the tunnels, and a couple of sculptural signposts caught the eye. The natural world is well documented by displays posted at intervals.

By the time we reached Nailsworth, we were ready for our lunch. The look of a menu we passed offered a temptation to halt there, but the prices put us off so on we pressed along the Avening Road to our planned destination, the Weighbridge Inn. The look on my friend's face when his 2in1 pie arrived sums up the general happiness not to have been deflected into William's Kitchen.
Posted by Martin Davis at 18:51