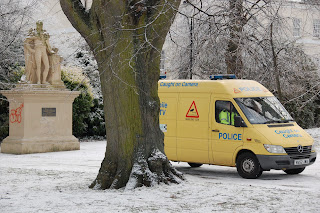 "Hundreds of students are gathering in Cheltenham to stage a protest against a planned rise in tuition fees" - so promised the press release issued first thing this morning. The police turned out in force. Bus routes were diverted, and not just because of the snow.

The water froze before reaching the taps in my Oxford rooms in 1962. Surely students today are not put off from marching by a little cold? In a place where the annual GCHQ rallies used to witness thousands coming together, just a few tens ambled in after midday today - shepherded by as many (if not more) of the boys and girls in yellow jackets, their kettling skills unneeded. William IV looked down scornfully from his plinth.
Posted by Martin Davis at 18:00