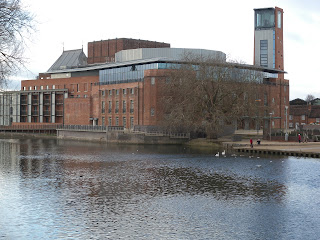 My photograph, taken this afternoon from the old bridge across the Avon at Stratford, shows the remade Royal Shakespeare Theatre, which opens in earnest next February. By the waterside, the line of the Scott building has been restored, with the café resited in the stalls bar, and a wide outdoor terrace opened up in place of the café. The dressing-room block has been refaced: in 1955, stagestruck, I saw Vivien Leigh on one of those little balconies during an interval of Twelfth Night: she was playing opposite her husband Laurence Olivier. The restaurant - excellent food and of course views - is now in the glass-faced box overlooking both the river and former theatre car park: it paid to be on good terms with Victor there - as with Leslie Mitchell in the box office. The tower is of course totally new, and I think rather regrettable. I would say the same for the octagonal crown over the refashioned auditorium.

Inside, there is plenty to admire. The layout is on the same lines as that of the Swan next door, but altogether less claustrophobic. The seats look really comfortable, and of course none is any distance from the stage - as in the Courtyard. I can't wait to hear what the sound is like.

One major disappointment: try as I might, I can find nothing in the literature to indicate what steps have been taken to make the refurbished RST energy-efficient. Heating the cavernous new shop/foyer area seems likely to cost a bomb.
Posted by Martin Davis at 18:37