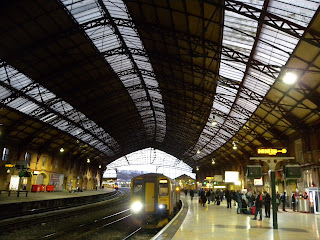 * the weather - as bad: not much fun bicycling back from Cheltenham Station in the snow this evening.

I had taken the bike on the train to Bristol, for a visit to watch grandson Laurie in a starring role as a gingerbread man - in his playgroup's Christmas show. In fact, all 31 of the little darlings had starring roles, but naturally Laurie was the only one who really mattered. (Photography generally encouraged, but results not to be posted on the internet, I was advised.) I wondered if any of them would make it onto whatever turns out to be the 2025 equivalent of The X Factor.

It is always nostalgic, coming to Temple Meads Station, and reliving the misery of the beginning of each new school term in the early 50s.
Posted by Martin Davis at 21:34