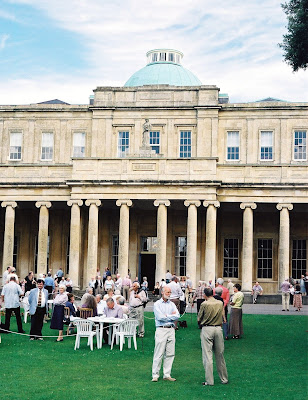 I shall try to put together a bit about our fortnight away later (by popular request!). Meanwhile, one memorable event last week was Shakespeare's Richard III in the ruins of Ludlow Castle. With strong performances from the three tragic queens (bringing to mind Macbeth's witches in this production), I was struck by the way the play both contrasts and overlays the mad with the bad.

But for me the holiday's most searing experience was to visit (earlier that same day) a former work colleague. Not much my senior in age, he has for the past year been confined to a home for elderly people with dementia. Once the childlike excitement in his voice subsided, he might have been the man across whose elegant office desk we used to sit and chat. When I told him we were staying near a big house locally, “We used to go to dances there,” he recalled. I brought along some rather ritzy wafer chocolates, Ludlow's best. “Like After Eights,” he said, as he struggled to open the bag. Eventually, I did it for him; and he then proceeded to scoff the lot within the space of five minutes. Death by chocolate would be a merciful release, I thought.

Thirty-nine years ago, I was present in the Queen Elizabeth Hall for the première of Peter Maxwell-Davies's Eight songs for a mad king. It was a novel sort of occasion: members of the Pierrot Players sat in cages on the stage, with a frenetic Roy Hart as the deranged King George - as mad, but not as bad as his predecessor Richard also III - leaping around them, and eventually seizing and stamping upon a player's violin. At the end, the composer Max, looking for all the world like a schoolboy, jumped up onto the stage to storms of applause.

Was it all a con, I wondered, this blend of foxtrots, gavottes, didgeridoo, birdsong imitations and the rest? Now the work has the status of a classic. Even a wine is named after it! And its creator is Sir Max and revered as Master of the Queen's Music.

This afternoon, in the Pittville Pump Room, Max discussed his piece with conductor Charles Hazlewood as part of our Music Festival, before its performance by Psappha - one which (in the light of last week's experiences) made excellent sense, in its commemoration of extreme madness with extreme music.
Posted by Martin Davis at 19:37