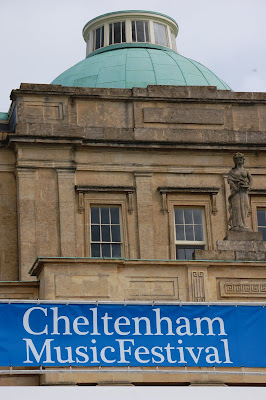 I've only just caught up with Joe Queenan's provocative article with this title. Listening to Peter Maxwell-Davies's new piano quartet on Sunday morning at the Pittville Pump Room, my thoughts went along similar lines: I hadn't read any programme notes, so heard it with an innocent ear. For one reviewer it "commanded total attention over its 24-minute span." I was talking to her in the interval, and - coward that I am - declined to air my view then: for this listener the 24 minutes could not come to an end soon enough. But at the outset of this Primrose Piano Quartet concert, I did much enjoy their performance of the Dohnányi String Serenade.

It was rather the same story on late Thursday night at the Town Hall Tickell & Bhamra session: spnm put it on to explore the possibilities of combining Indian and British folk traditions. The motley quintet (Northumbrian pipes, sitar, tabla, melodeon and fiddle) came with eight works - four written out by spnm composers, four composed by the players themselves: the performances of the latter - sometimes verging on a jam session - won hands down. I was describing the programme to someone at a later concert: evoking Goering he murmured, "When I hear the words spnm, I head for the exit."

Nobody was doing this on Friday morning, when the Estonian Philharmonic Chamber Choir (in their second Cheltenham Festival appearance) were performing unaccompanied music from their folksong treasury. An astonishing sound! And free wine afterwards.
Posted by Martin Davis at 12:38