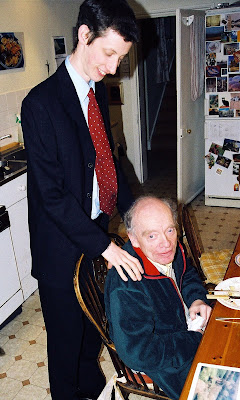 When I first went into partnership as a solicitor, it was with Michael Rawlinson and Harry Wiggin in 1974. Michael, his wife Anne and their two (then young) children Nicholas and Susan became firm friends. Michael was Leo's very fond Godfather: he never forgot a birthday.

While Harry and I moved on, Michael stayed at Wiggin and Co (it was always "and" then) until his retirement, 11 years ago. Latterly he was the firm's PSL, one of the first of that breed in this country, and one of the best: Michael ran a very tight ship in the legal information flotilla, and played an important part in securing for his firm its high reputation in a specialist field. (He would no doubt have been quick to draw attention to the mixed metaphor - not in any pedantic way, but illustrative of his deliciously dry and self-deprecating sense of humour.)

The cruelty was that no sooner had Michael retired than he contracted Parkinson's Disease, which with added complications immediately laid him low. Little of that travelling he had longed to do with Anne was possible, and none of the walking. Rather, his life became more and more an alert mind imprisoned within a bent body. Even a short while ago, when visiting him at our nearby Sue Ryder Home, he had books on mathematics and the Northern saints at his side. On a rare occasion he lost the thread during his conversation with me. "Please talk among yourselves," he said.

Anne looked after Michael at home lovingly, with only very occasional breaks when she went to see the children (now happily settled in Spain and America). She would ring me if this meant I could visit Michael in nearby respite care. She did this most recently last week. I noticed a change in him on Friday, but on Sunday he seemed more on the ball. Yesterday morning, when I called, he was sleeping in his chair, Radio 4 playing as usual. I sat with him for 15 minutes, watching his face change mood, a smile twice flickering across it as he dreamed. Poor man, I thought: he looks so well - surely this living death could continue a long while. Please let it not be so!

In the evening, Anne rang to say that Michael had died - suddenly and peacefully whilst being given his lunch. Thanks be to God, but equally - as Leo said - "How sad, as he was such a nice bloke."

Leo and Michael were photographed (top) in January 2004; and (below) after Leo's Confirmation in May 1992. 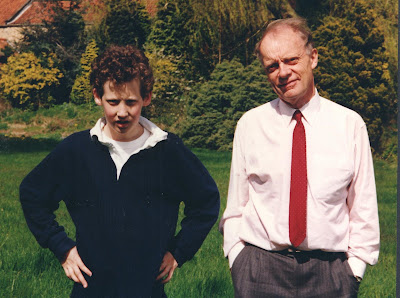