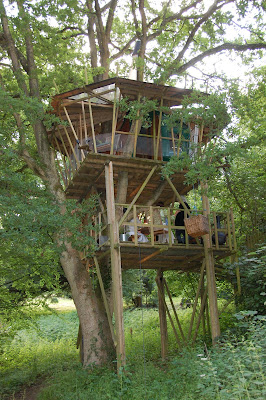 I hardly recognised David Wilkin's treehouse on our visit to The Pinetum last night. What started (when we were last there) as something rather modest has now blossomed into a two-storey confection, complete with woodstove. What a romantic idea! And all standing free of its host oak tree.

The Pinetum was the starting point for one of our family bike rides, to St Weonards. I seem to remember the first puncture occurred about ten minutes after we had set out down the woodland track - and the last (of several) some hours later.

Which reminds me that this is Bike Week: the Cheltenham Cycle Campaign were handing out leaflets in the High Street and showing off the smart yellow bikes you can hire if you belong to the University of Gloucestershire - and which may soon be available to all Cheltenham residents, as they are in Paris and elsewhere.
Posted by Martin Davis at 17:28