"Boldly not to go" 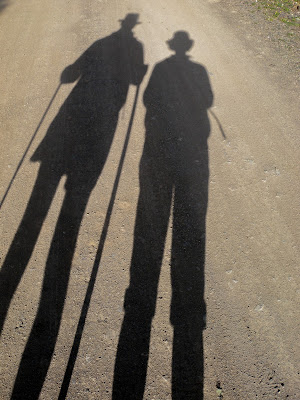 This is the title The Tablet has given to an article I wrote for them earlier this year about pilgrimage. After some delay, it is - I see from their website - included in this week's issue, dated in fact 15th June. I reproduce it here with permission of the Publisher: note the weblink I have included.

The photograph of Caroline's and my shadows I took walking early one morning on the Via de la Plata in Spain in April 2010: originally, The Tablet asked me for an illustration, so I sent this, which they seemed to like ("A good generic pilgrimage shot, and applicable to a pilgrimage almost anywhere"). But I see that instead they have now included with the printed article a cartoon which seems to me to miss the point I was making.

"What is the essence of ‘pilgrimage’? Martin Davis explores the question using the hypothetical meeting of a fictional Justice and Peace group of a notional Catholic parish, St Bilbo’s … but the issues raised are very real indeed.

Pope Benedict’s Caritas in Veritate had been the subject of discussion in the St Bilbo’s parish Justice and Peace group the previous year. “We must recognise our grave duty,” members noted (in paragraph 50), “to hand the earth on to future generations in such a condition that they too can worthily inhabit it, and continue to cultivate it.” Inspired by Cafod’s LiveSimply campaign, members began to ask themselves how, as witnesses to their faith, they could each live more sustainably. “We are used to fasting during Lent,” one said. “But then resume normal life. So what is the impact of the choices we make daily, upon other people and the future of the planet?”

This led on to a study of how members used energy, both as individuals and within their families. Roughly 15 tonnes of carbon dioxide equivalent represents our UK average annual “footprint”. For those living near the breadline and in inner cities, it can be less: for others, more. They read a suggestion made by the ecumenical charity, Christian Ecology Link (CEL): a sustainable allowance for Christians seeking to walk the talk, CEL proposed, should be 2.5 tonnes of carbon dioxide equivalent a year (2.5 tonnes is a sixth of the current average: CEL concedes this is a target it will take most of us many years to reach).

The problem is this, the group realised: much of our “allowance” would be absorbed by things it’s possible to reduce, but not dramatically – food and drink, home heating. Then there’s commuting to and from work. But what about other travel? Finding the tonnage attributable to particular journeys was not difficult. London to Glasgow and back by plane: half a tonne of carbon dioxide equivalent; a flight to Hong Kong: 3.5 tonnes. Clearly, flying distorts our carbon footprint considerably. “But surely, doesn’t it all depend on the reasons for our trip?” one member argued. “Last year, my mother went to Chicago to visit her dying brother: wasn’t that better than my friend flying to Vilnius for a stag weekend?” The group decided a discussion along these lines, while interesting, could only end up as negative: “We need some positive response within the parish to the challenge of carbon reduction.”

A quiet voice spoke up: “Didn’t I read somewhere that the Stations of the Cross were invented at a particular point in time, a time when it became impossible to follow Christ’s last steps in Jerusalem, on the ground, because of hostilities? As pilgrimages have never been more popular than they are today, perhaps we could find a new way of doing pilgrimage closer to home.”

But what was “pilgrimage”? First and foremost there had to be a journey. It may be enlightening, to browse through the four million links that a search for “virtual pilgrimage” gives on Google. Ultimately, though, pilgrimage is not for couch potatoes. A journey is needed, then, and one with a point in view. A pilgrim is not a wanderer.

Nor does pilgrimage equate with tourism, often though tourists chart their way to pilgrim destinations. One group member had walked to Santiago de Compostela: “Many on the route”, she said, “admitted they were there just there for an active holiday. They saw stamps in their pilgrim passports as mere souvenirs, unconcerned as they were about the historic link between pilgrimage and that unfashionable word penitence.” What defines a pilgrim is the spirit of penitence in its widest sense: it’s as necessary as a hat and a staff. Parallel to an examination of conscience, a pilgrim prepares for departure. Inessential things are left behind. Attaining the necessary fitness is a penance. Leaving home on an uncertain journey implies vulnerability and trust. Pilgrims rely on the kindness of strangers – other pilgrims and those living along the way. They put aside their usual comforts, but for what? So that they can renew their faith, and become better examples to others.

Keeping these core values in mind, the group prepared St Bilbo’s for its first alternative pilgrimage day. It was carefully planned not to be just another parish outing. Rogation Sunday was chosen, as there’s a long tradition (now largely unobserved) for Rogation-tide processions. After Mass, a quorum of parishioners of all ages set out in the rain. With them were a number of residents of the local Cheshire Home using wheelchairs, and a handful from the neighbouring St Frodo’s Anglican parish. The route lay along part of the parish boundary and then into the adjoining parish. A halt was made outside one group member’s home, where the parish sister led penitential prayers.

“Every place on God’s earth can be a holy one,” she said. “We don’t have to travel afar to find him. We don’t need a celebrity destination. Each day, he’s there, where we are, in our midst. Didn’t Moses find himself on holy ground without even knowing it (Exodus 3:5)? So let us now walk on in silence, reflecting together on what it means to walk humbly in God’s world, to walk lightly on his earth.”

In time for a late lunch, the party, a little wet, reached the hall of the adjoining parish’s primary school, where everybody pooled what they had brought, and some nursed others’ blisters. “How does it happen”, asked the parish priest, “that when we bring food to share, there is always some left over?” He then spoke about the Sacrament of the Sick, and administered it to those who wanted it. Many came forward. A member of the organising group reminded everyone how, in former days, your pilgrimage didn’t end at the destination: you had to walk home again. “However,” he said, “for those who would like a lift, I’ve arranged a minibus.”

At the St Bilbo’s AGM, there was the chance for feedback. One parishioner said: “We are a large parish. I always sit in the same pew, and used to exchange the sign of peace with someone I didn’t know. Through the pilgrimage walk, I’ve made a new friendship. How can we love our neighbour, if we don’t know them?” Another benefited from meeting the Cheshire Home residents, and had now become a regular visitor there. For a number, the pilgrimage route had taken them to parts of their neighbourhood they had never before visited: resolutions were made to explore their local area more, and to consider its needs. Nobody opposed the suggestion: “Let’s do it again next year – and invite others!”