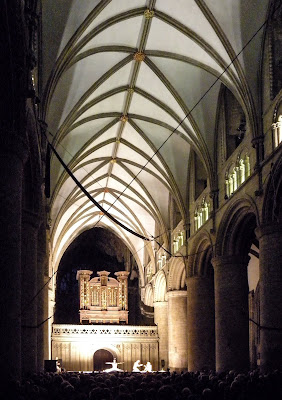 These celebrated words of Hamlet about man's nature go with either the preceding phrase - "In action..." - or that following - "...in apprehension" - according to whether you prefer the First Folio or the Second Quarto. At one point tonight, in Gloucester Cathedral, they fitted the latter to perfection.

We were at a performance by the Australian acrobatic ensemble Circa alongside I Fagiolini, the specialist vocal ensemble which emerged a quarter of a century or so ago out of Oxford. "How like an angel", a production shared by Norfolk & Norwich Festival between Norwich and three other English cathedrals, attempts (not always very successfully, IMHO) to fit music of the 12th, 16th/17th and 20th/21st Centuries with mind-blowing acrobatics, principally on stages at either end of the nave. However, at the mid-point of the hour-long performance, one of the five acrobats stands "apprehensively" in the spotlit clerestory before allowing himself to tumble freely down to the floor: there thankfully his fall is broken by some sort of bed that's been wheeled onto precisely the right spot. Never have I heard such a sharp collective intake of breath!
Posted by Martin Davis at 23:30