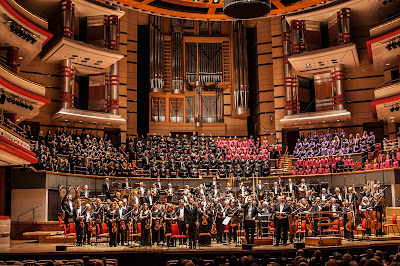 Last September, our Town Hall hosted the première of Richard Blackford's "Not in our time": yesterday evening, we went to Birmingham for the UK première of Jonathan Harvey's "Weltethos" on a somewhat similar theme - seeking common ground between the world's main religions on the basis of their shared ethical principles and values. Blackford's focus, a decade on from 9/11, was on peace. Harvey - brought in by the Berlin Phil. to flesh out musically the thoughts of theologian Hans Küng - is operating on a broader canvas: his six "movements" are humanity, the Golden Rule, non-violence, justice, truth and partnership.

You may think this a worthy event for the opening of the London 2012 Festival and Cultural Olympiad. We had both been looking forward to the evening for many months: it's certainly a thrill to visit Birmingham's Symphony Hall, particularly on a big occasion. And after all, isn’t peaceful coexistence what the Olympics are about - individuals competing against each other in sport unburdened by politics?

I was glad we arrived in time for Simon Halsey's pre-performance talk: otherwise the scheme of this ambitious work would have been impenetrable. As it was, I found the 90 minutes dragged, notwithstanding the diversion of watching two conductors, a huge orchestra (there were six percussionists), with the three separate choirs bobbing up and down. I liked the idea of a children's choir to plead for us to plan for the future; but does the awfully dull music of their refrain really bear six repetitions? (Judge for yourself: the piece was broadcast live, so you can ListenAgain.)

There just wasn't sufficient variety between the sections, nor did the work arrive at a significant conclusion. Its appeal is to the head, not the heart; and what's more it is to the Westerner's head, notwithstanding the aspiration of Küng (who was in the audience) to address people of faith throughout the world.

I've been an admirer of Küng since I heard him around thirty years ago, in St George's Chapel, Windsor, eloquently expounding his belief that all the Abrahamic religions should and could work together against the real enemy of our time, materialism. Jonathan Harvey has been a good friend to Cheltenham, visiting often for early performances of his work: much of it I have appreciated in a way that I rarely do with modern classical music. Nor could you wish to meet a milder man. My criticism should not take away from the achievement of bringing together this new piece and the huge forces needed to perform it. But Simon Halsey, methinks, doth protest too much when he mentions it in the same breath alongside "Elijah" and Britten's "War Requiem".

One of the versions of the Prayer of St Francis contains the words "Lord, make me a channel of thy peace;... that where there is discord, I may bring harmony." Ultimately, "Weltethos" wont last because it lacks tunes.
Posted by Martin Davis at 00:30