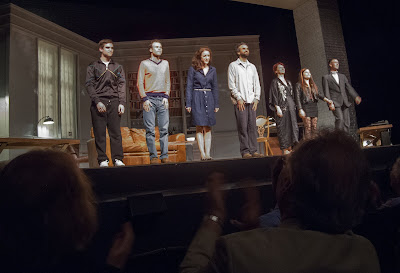 I haven't seen a Tom Stoppard play for a while, so when it was announced that his 1980s comedy "The Real Thing" was coming on tour to our local theatre, I felt the urge to go and see it. It's not one that I knew, and of course it's a bit dated in different ways, some of which matter, and some not. It was interesting, sitting there with Agnes alongside me, as the play was written in the year she was born. She enjoyed it, and I too, though I couldn't suppress a feeling at the end that there is less to it than meets the eye. English Touring Theatre and West Yorkshire Playhouse have done a good job on the production, in which Marianne Oldham as Annie stands out. What a pity the audience wasn't a bigger one! Come on, Cheltenham! (Though I can hardly talk, the little we do to support our Everyman.)
Posted by Martin Davis at 22:23