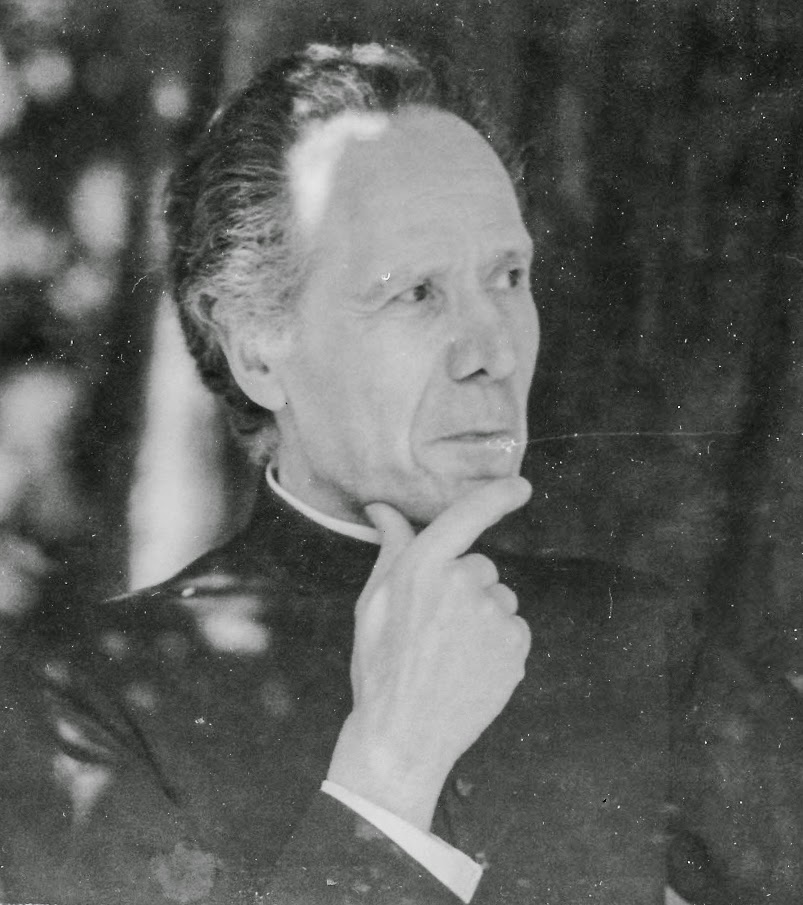 I last saw my friend Fr. Jean-Marie Charles-Roux in Rome, 13 years ago: he had retired there to the Rosminian house in via di Porta Latina, near to the then British Embassy to the Holy See where we were staying for the weekend. At our instigation, he was added to the Saturday night dinner party, full of diplomats, where of course he was perfectly at home. Rome was a fitting place for him to end his days: he epitomised the Roman Church - all that's best as well as all that's worst, as I see it.

This photograph was taken at our wedding, in June 1975. Then just turned 60, he lived as a curate at St Ethelreda's, Ely Place, where I first came across him when I worked in the City. We got to know each other quite well, sharing a love of Wagner's music dramas. He always needed a good supply of handkerchiefs, he said, when listening to Tristan and Isolde. I don't recall whether it was Tristan or Die Meistersinger that I saw with him, sitting in best stalls seats (unfamiliar territory for me) at the Royal Opera House. (Someone must have invited him, and then been unable to make it.) For Jean-Marie, it seemed that listening to Wagner was a mystical experience almost on a par with saying Mass. I owe to him a better understanding of the meaning of the beauty of holiness.

He came to the house I shared in Fulham and said a house Mass once, before supper. A tummy rumble nearly sent one of the others present into a fit of giggles. Yet because he took himself seriously - though not always too seriously - his way of faith seemed plausible. Seldom was he bitchy, though his oblique comments about his parish priest (Fr. Kit Cunningham) ought perhaps to have been heeded by those who mattered.

Others have of course written more eloquently about Jean-Marie, who died earlier this month, just short of his 100th birthday. I was intrigued to learn that he masqueraded during a World War II escape attempt as an English officer, Captain Charles Russell, matching the initials on his uniform.
Posted by Unknown at 19:22

Colin writes, "I reckoned that his sermons at St Ethelreda's were the only ones in London worth hearing."