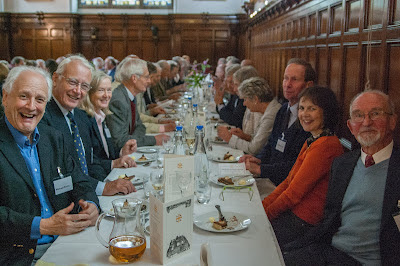 Agnes began her Creative Writing course at the weekend, and is now a graduate member of St Catherine's College - the third in the family to make it to Oxford. It's hard to believe that 50 years have elapsed (almost) from the day I first arrived at University College to begin my three-year degree course.

Caroline and I returned there yesterday for celebrations in College - a lunch followed by a symposium, "Past and future reflections". The former was splendid (we never looked forward to food of that quality in our day, even for the grandest occasions): the latter, though in part entertaining, was dominated by a few rather noisy voices. They reinforced the impression that we are a complacent generation.

The College had circulated a Matriculation list with 104 names on it. 18 are now known to be dead - we stood in silence to honour them before lunch: of the remainder, 38 turned up (from all parts of the globe), and an additional 29 spouses and others were present. It was the first time Caroline had been to Univ. on an official visit.

I had been charged with taking photographs, which ate into the time I had for chatting amiably to old friends, but also gave me an excuse not to chat too long to others amongst those present. My website now hosts the album.

On that first day in October 1962, my mother drove me up to Oxford: we parked in the High Street (now impossible) at the entrance to Logic Lane - having discovered that my first year rooms were in Durham Buildings, just nearby. The car parked in front of ours belonged to the mother of another new boy. David Mills (for it was he) and others present yesterday may have their own Wikipedia entries. For my part, I am content to be relatively anonymous.
Posted by Martin Davis at 21:41