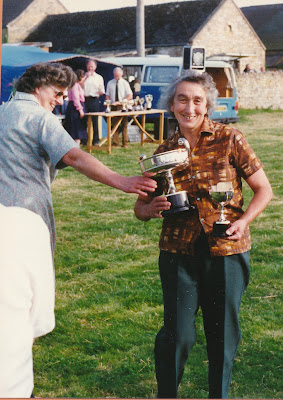 News has just reached us of the death of Val Smith, aged 80. She was one of those people whom it was a privilege to have known. I first met her nearly 40 years ago, when I went to live in Sevenhampton. She, her husband Alan and their then young children Brian and Pat, lived along the lane at Gassons Farm, Brockhampton. Val lived on there following farmer Alan's far-too-early death, and (later) the happy day of Pat's marriage to the vicar's son, also a farmer.

Val and her sister Gill, still in Brockhampton, were born Coombe. They were brought up in the old family brewery next to the Craven Arms. It first came to a Coombe more than 150 years ago - possibly won in a game of cards from a Wood, ancestor of the family who lived in our old home, Hill View, Sevenhampton.

Not many people like Val and Gill these days live their whole lives within just one community. And Val didn't just live there: she was - with one or two others - its life and soul. Nothing was too much trouble. The newspapers needed delivering on a snowy morning? Val would do it.

It goes without saying that when the village Produce Show came around - it always used to be the second Saturday of September - she would be helping, and nothing gave her and everyone else more pleasure than when she won a cup, or (as here in 1988) two.
Posted by Martin Davis at 12:18