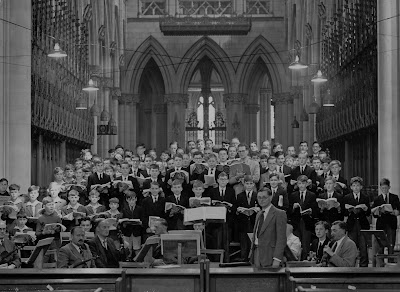 This week's Tablet carries an article about the late Roger Bevan, musician, and his amazing family. His granddaughters Sophie and Mary are both ENO solists, Sophie recently receiving acclaim for her part ("an eager little minx") in Der Rosenkavalier.

I came under "Mr. Bevan's" influence in the mid-50s, shortly after he had arrived to teach music at Downside. I was in my last year at the nearby prep school, All Hallows, and the school choir was co-opted to supplement the treble line for Messiah in Downside Abbey. (From the photograph, you can judge that it wasn't a minimalist performance. Incidentally, I spy Canon Thomas Atthill standing just behind Roger Bevan.)

It was the first time I had sung in a proper choir, and I still recall the buzz it gave and my huge debt owed to the unassumingly great Mr. Bevan - much the same sort of debt (albeit in a minor way) that his children and now grandchildren owe him: for a lifetime's love of music.
Posted by Martin Davis at 10:00