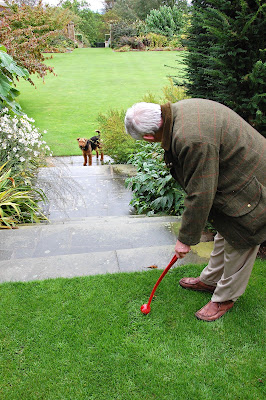 Richard hosted yesterday's book group meeting. As at our last session, six weeks ago, we were fairly evenly divided about the merits of our choice, The Road Home, by Rose Tremain. Two of us were reminded that we had read her earlier Restoration, and hadn't much enjoyed that either. I for one was baffled that The Road Home should have won the 2008 Orange Fiction Prize: it must have been a bad year. A book with a large hole in the middle, I felt: the main character was a cipher.

We have gone for non-fiction next time: Jonathan Raban's Passage to Juneau: a sea and its meanings. This ties in with the new-found celebrity of Alaska's lipsticked pitbull Governor, and echoes one of our earliest choices The Black Sea when Steve first convened our group, four years ago this month.

The cover of Passage to Juneau includes a puff with a reminder of our last book: "Adrift in foreign lands, eternally questioning the concept of home, Raban crafts a more immaculate, shipshape habitation out of the language than almost all his contemporaries." It's an excerpt from a FT review. The reviewer? Rose Tremain.

I'm not sure when we shall be able to meet next: Richard is usually away in October, and he and Simon were encouraging me to firm up a vague plan to go InterRailing - which means we would be away till late November. We shall see.

Before our book discussion, we were looking forward to a visit to the Moreton Show. With all this rain, though, it would have been a sea of mud so, not surprisingly, it was cancelled. We went instead to the recently-opened Court Barn Museum in Chipping Campden.

A couple of years ago, Richard had taken us round the Court Barn when it was still at the development stage. We were all immensely impressed with the finished product: the displays pull together comprehensively the major contribution the Arts & Crafts movement has made to the life of the Cotswolds. And happily, when there we bumped into one of those most responsible for helping people to appreciate it, Mary Greensted.

But we worried for the Museum's future success. It suffers from real lack of visibility: how can its landlords, the Landmark Trust be persuaded to be more flexible on this front? Would some form of laser projection on the adjoining wall be possible?

Almost the highlight of our day: Richard took us (and his Airedale) round Monique's and his wonderful garden - and the rain stopped.
Posted by Martin Davis at 07:17

Someone close to the Museum has written: "I read you comments - particulalry about the higher profile - with interest. It is a great museum and it is largely because of the tremendous enthusiasm, dedication and persistance of Frank Johnson, Alan Crawford and the former chair of the Trust, David Evans."