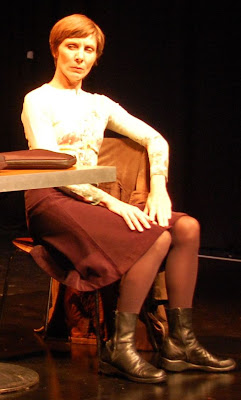 Riverside Studios, on the Thames at Hammersmith, has been hosting a fortnight of fringe opera, under the enthusiastic artistic direction of Bill Bankes-Jones. The Festival ends this weekend with a visit from Scottish Opera. (They bring five recent works, including one I see directed by Ida's Godfather Frederic Wake-Walker.)

Caroline and I went along on Wednesday evening to sample what was on offer, meeting up with some old friends. It was a heartening experience, particularly after the disappointment I felt with some contemporary music at this year's Cheltenham Festival. Committing oneself to a full evening of Birtwistle, Adès or even Adams requires courage; but everyone it seems can hope to enjoy something during a session with tête à tête at the Riverside.

We saw no less than seven operas, including some work in progress. The excitement began with a snippet about the travails of a knife thrower's assistant, rather splendidly staged in the Riverside's foyer. Just as we were wondering when it was to end, the "orchestra" (which consisted of an electric keyboard) collapsed onto the floor. 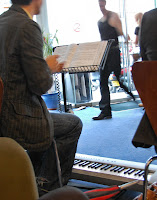 Next up, on stage this time, was a little two-hander, one of the singers spending the entire performance in a "zorbing" pod. 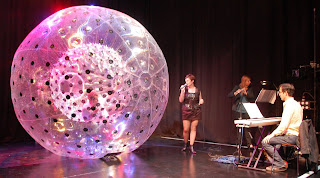 This has to be a first, but (like the foyer number) it may also be a last. "Flam", which followed it, composed by Orlando Gough (one of the founders of The Shout), is an altogether more weighty piece. This entirely a cappella music drama was performed with great virtuosity by Rebecca Askew and (see my main photograph) Melanie Pappenheim, together with Michael Henry. With its faint echoes of the Oxen of the Sun, "Flam" will I'm sure be seen elsewhere. It might spoil your fun if I told you the plot.

Size Zero Music Theatre's two offerings were less successful. Though the Manchester-based company shows some potential, better material needs to be found. Before this, though, there was a delightful duet by members of the tête à tête company between an archetypal Prince Charming and his Sleeping Beauty - Snow White - Little Red Riding Hood (all rolled into one): this holds a lot of promise for when more worked up.

Finally, the weird and wonderful Carysfort Stories: this was not so much opera as bitter sweet jazz revue, performed by Georg and Thomas, a couple of Austrian buskers, along with Loré Lixenberg. 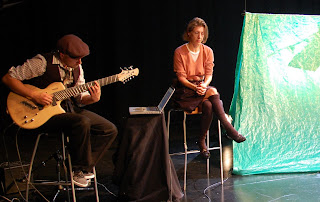 The set featured a bar stool, on which two silent women took turns to sit, and a tent, illuminated from behind. All the performers live in or near Carysfort Road, Stoke Newington, from where they brought along this rather low-key drama of local life: Lake Wobegon comes to London. The versatile Loré Lixenberg confined herself to the tent throughout, declining to emerge even for a well-earned curtain call.

This was an appropriately bizarre end to a long evening, throughout which energy levels remained high. It has to be amazing value for £25, inclusive of supper in the buzzy Riverside Studios café, a true festival atmosphere.
Posted by Martin Davis at 07:33

Thanks for the review, been waiting for one... Re: The Shout, they are always crowd pleasers and Flam is a wonderful piece. (That pic btw is Melanie not Rebecca) if you have a further interest in the group as a whole, then do stop by here: http://www.facebook.com/group.php?gid=5183122457