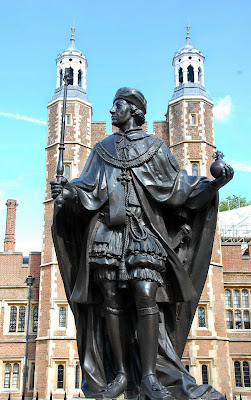 Ed Nightingale and Bella Mackie were married yesterday afternoon in Eton College Chapel. It was my first visit: what a joy to worship there, with all the colour and life in those eight huge John Piper and Patrick Reyntiens windows!

The wedding service was memorable on a number of counts: for the groom being invisible to most of the congregation - poor man, he had just broken a tendon playing tennis; for the address, by the same priest who married Ed's parents; for that splendid priest omitting to ask whether anyone objected to the marriage (once a lawyer, always a lawyer); and for the music: Parry, Mozart, Bach, Handel, Beethoven - perhaps all to be expected. But Offenbach? Anyway, the Tales of Hoffmann barcarolle was sung beautifully by two of Ed's sisters.

We emerged after the ceremony into the sunlit School Yard, dominated by this statue of Eton's founder, King Henry VI. I've always had rather a soft spot for this king, in spite of - or possibly because of - his being on the "wrong" side in the Wars of the Roses.

One could understand if Ed - an English teacher - had muttered to himself these words (from Shakespeare's Henry VI, part 1) when he met Bella. She was a smashing bride.
Posted by Martin Davis at 17:16