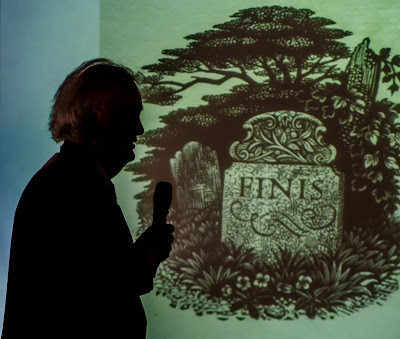 The 21st and final Alan Hancox lecture at the Literature Festival was given yesterday morning. "A hugely successful series," John Randle said, by way of introduction: he paid particular thanks to Shelagh, Alan's widow, "a gentle encourager to us all."

The series, as John predicted, ended on a high note, Humphrey Stone giving a most affectionate portrait of his father, whose "life and work were one". We recognize the name, Reynolds Stone less readily than his artistic output: the Royal Arms on our passport, currency notes, the Dolcis logo, the Victory and other postage stamps... Humphrey Stone presented us with illustrations galore, projected onto screens that - because of the wind blowing outside the marquee - jumped around at times, making this member of the audience feel slightly seasick.

We saw also samples of his father's 350 bookplates and 100 memorial slabs. Mostly, they were drawn at a chaotic desk in the drawing room of his Old Rectory, three miles from Chesil Beach. Stone was essentially a miniaturist - "the eye, delighted by a small mouthful, is soon surfeited," he himself said. Pedantic, maybe, but nevertheless Stone was described by Iris Murdoch as "a totally unpretentious being," working with imagination, scholarship and good taste.

Besides lettering, Reynolds Stone's other great love was landscape, the inspiration for his "salad paintings", many featuring waterfalls and trees: in Sylvia Townsend Warner's words, it was "almost as though he was exiled from being a tree itself."
Posted by Martin Davis at 11:03