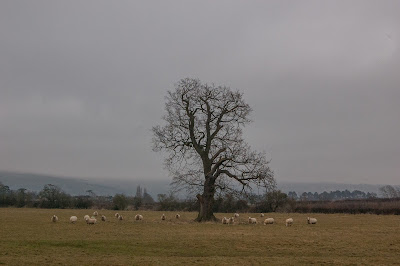 From the Plough in Prestbury, we walked today Northwards to Southam, past the vulgarity of the Ellenborough Hotel. Skirting Cleeve Hill, we then made for Bishop's Cleeve, clinging on gamely to its apostrophe notwithstanding the rash of illiterate housing developments spawned there in recent years. Having crossed the A435, we aimed towards Swindon Village: this photograph was taken looking back towards the Racecourse and the escarpment - a surprisingly tranquil scene when you think of Cheltenham's suburban tentacles reaching all around that area. It was a cold morning: the sun only broke through as we arrived home after lunch.

I'm still thinking about last night's Film Society offering, Monsieur Lazhar. Continuing the theme mentioned briefly in last Thursday's post, it portrayed an Algerian asylum seeker: his family having been murdered as they were about to join him in Canada, he bluffed his way into a teaching post left vacant by the suicide of his predecessor. Without any excess of sentiment, we watched his growing engagement with the young teenagers in his charge, his comforting them in their bereavement acting in turn as a comfort for himself. Brilliant.
Posted by Martin Davis at 18:27