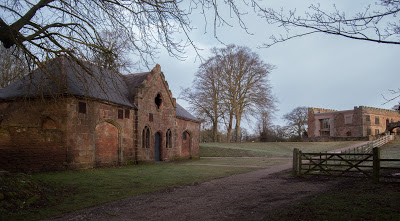 We have travelled to North-East Warwickshire today, to stay in one of the latest Landmark Trust properties to become available. Astley Castle was really more designed - in the 13th Century - as a fortified manor house: this part of the world is pretty flat, so the site has few natural advantages. The Trust provides parking behind the 18th Century Coach House, seen to the left of my photograph, and wheelbarrows for luggage to be pushed up the path - hardly an arduous task as it's certainly not an ear-popping ascent. The gates would hardly stop many armies in their tracks, though the moat is impressively deep.

What is so attractive about Astley? Its history - three English Queens are associated with it; and the fact that there's now a totally modern dwelling with plenty of room for eight people, built within the old walls. Brilliant in fact for a four-day stay!
Posted by Martin Davis at 17:25