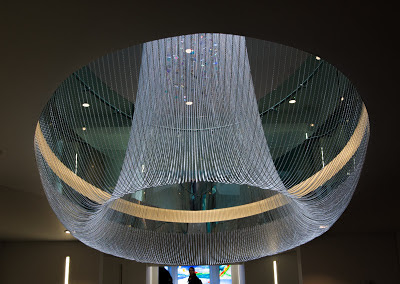 Yesterday, my book group met in the salubrious surroundings of the Birmingham Art Gallery & Museum restaurant. Not the hautest cuisine, but adequate: we missed our usual pints of bitter. Breaking with tradition, we discussed The Book over lunch, rather than tea. It was the sequel to Hilary Mantel's Wolf Hall: Bring up the bodies didn't grab all of us as firmly as it did me, but we seemed to agree that it was worth looking at. Shall I buy volume 3 when it appears? Probably.

Why Birmingham? Because Peter, our newest member, is full of enthusiasm for its examples of Arts & Crafts architecture. So, after we'd looked round some of the galleries and finished our book discussion, he led us down Edmund Street, Margaret Street, Newhall Street and Colmore Row, ending up at St Philip's.

Having admired the late Burne-Joneses there, we went across to St Martin's to look at the very different earlier window by him, saved by a whisker from destruction in World War II.

My companions were taken aback by Selfridge's, hovering over the Bull Ring, but even more by the new Library, to be opened next September, but now already dominating the East end of Broad Street. For my part, the excitement was this (photographed) new kinetic installation in the oculus of the Museum's new History Gallery - by Keiko Mukaide and Ronnie Watt: it was unveiled earlier this year. And whose is the amazing stained glass window on the stairs behind it, without any label?
Posted by Martin Davis at 21:04