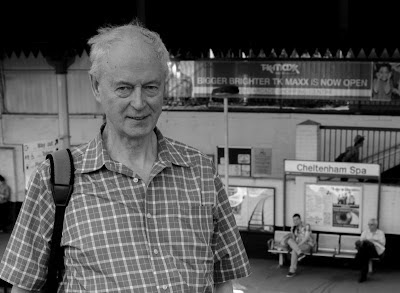 Out of the blue, an old school friend contacted me last month. He had found me via this blog, and in particular a post I put up following the death of our housemaster last year. Yesterday, he came to lunch, and we then walked some of the town's streets looking at Regency and Victorian buildings - he is an architectural historian, who has worked for three decades or so in the United States. In spite of this, he has not lost the Irish accent I first became used to hearing at Ampleforth in September 1956.

Both of us seem to have worn quite well, thank God: I had been to the doctor earlier in the day, who gave me a more or less clean bill of health. A waxed up ear is hardly cause for complaint, even though it now means I have some form of medicine for every orifice of my body apart from my tummy button.

Last evening, I spent in the company of two more Americans: the almost legendary James Watson was supposedly in debate with Charles Jencks at the Science Festival, "The scientist and the landscape designer." There wasn't much debate, sadly, but the hour was informative for me, who knows nothing about DNA - let alone RNA, its sister molecule.

Most of the talking was done by Charles Jencks, in the role of artist. He acknowledged his debt to Watson and Crick for their pioneering work and subsequently to Watson for the patronage which enabled Jencks to complete his recently-unveiled sculpture for Dublin Botanic Garden. Jencks however criticised the negative metaphors surrounding so many recent discoveries – “the selfish gene,” “the big bang” (“Pentagon language”, he said) and “black holes”, to name but three. As an artist, he was trying to come up with better metaphors, “more challenging, beautiful, seductive.” His landscape designs echo the thought of the late Ian Hamilton Finlay: “A garden isn’t just a retreat, it’s an attack.”

This time last year, Caroline and I joined in a Festival visit to a Cotswold garden crammed full of scientific references: I think I learnt more last night, though, from Charles Jencks' excellent images. What I found hard to accept was the need to distinguish between the mediaeval idea of the Creator, sitting on a cloud, and what Jencks called “cosmogenesis,” the continuing unfolding of creation in which we are all playing a part. For a person of faith, these are just two ways of looking at the same thing, namely the work of God.

The need for elegance in scientific expression was recognised by both speakers. Is there an objective aesthetic? I wondered afterwards. Or does it, as with wind turbines, depend on your point of view: renewable fanatics (me included) more incline to look favourably upon them than do climate sceptics.
Posted by Martin Davis at 22:35