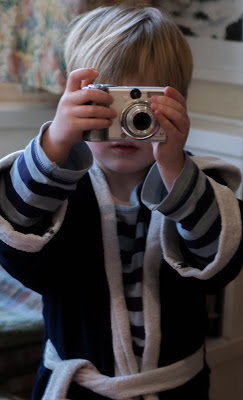 It's our youngest grandson's fifth birthday today, and Laurie's effort at photographing the photographer (in April this year) came to mind this evening as I watched the Film Society's latest offering: it's a film about filming an historical epic in Bolivia; and one of the few female characters videos the filming.

Pirandello would have admired this layering effect, and more so the echoes between the historical exploitation (being filmed), the location's "current" (1999-2000) water wars and the exploitation of the film extras.

Not a bunch of laughs, but a very brave film, and a tribute to the difference a film can make.
Posted by Martin Davis at 23:30