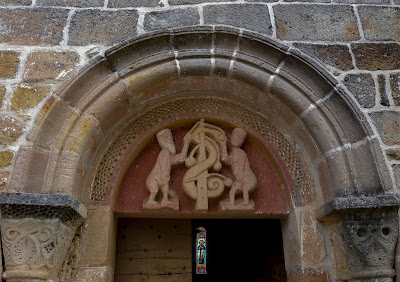 Peter and I arrived in Figeac at 2.30, having walked our final 18.5kms. quickly and easily: it started to rain during our lunch stop (at Saint-Jean-Mirabel), so there was no incentive to linger.

We had set out at 7.45, pausing to admire the painted apse of la chapelle de Guirande. The 14th Century murals depict in naive fashion Christ in Majesty surrounded by the symbols of the evangelists. At La Grange de Bord, Mme. Bontemps provided us with café au lait, but that was the only chance for refreshment we encountered during our journey today, apart from on the spiritual level. At Saint-Felix, there's a fine tympanum (see my photograph) depicting Adam and Eve each apparently as guilty as the other so far as the forbidden fruit was concerned, with clef-like snake: this anyway is how they saw it in the 11th Century. Saint-Jean-Mirabel also has a sculpted tympanum: the crucified Christ between his mother and St John - 13th Century, but less well preserved.

We crossed the Célé by the old bridge, pausing for final photographs ("I made it!"): there was our billet, Le Faubourg, at the bridge foot, not too far from the station, where I have an early train to catch in the morning if I am to be able to sleep in my own bed tomorrow night.

Though Caroline and I had spent time in Figeac on the eve of our first Voie du Puy walk (six years ago), it was good to have time to look round again, to do some shopping and follow the tourist route round the lanes of the historic town centre. At 6.30, Peter and I met again for mass (said by a priest from Senegal) in the parish church's Notre-Dame-de-Pitié chapel, with its golden reliefs depicting Passiontide scenes; and we then crossed the river for a significant dinner at Le Pont d'Or to conclude our happy four days together.

At breakfast at La Mariotte - home-made jams, a feature there - I said to French-Canadian Liliane, "This is our last day." "Nous retournons," she replied, "dans la vrai vie?"