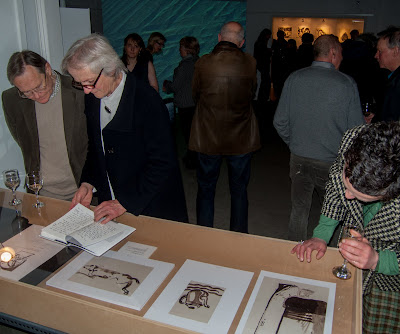 This is the title of an unusual exhibition at our Gardens Gallery. It "opened" this evening. Neville Gable travelled to the Antarctic a year or two ago on an artistic commission under the auspices of the British Antarctic Survey. There, he produced videos featuring himself, photographed by cameras (one launched on a kite); and he wrote daily emails to his wife, Joan, who used the text to produce a series of imaginative drawings. A book in a very limited edition has resulted - it was on display, alongside the last letter of Cheltonian Edward Wilson, who was part of Scott's last - ill-fated - expedition. Cheltenham Art Gallery & Museum are promoting this show, and have acquired the videos to go with their collection of Wilson memorabilia.

Seeing our MP, Martin Horwood, amongst others present at the opening, I bent his ear with my view of the government's Alice in Wonderland approach to the definition of "marriage": he said I was the first person in his constituency who had told him of their opposition to the proposal that gays should be able to "marry"; which amazed me. "All that's necessary for the triumph of evil is for good men to do nothing," didn't someone say?
Posted by Martin Davis at 21:08