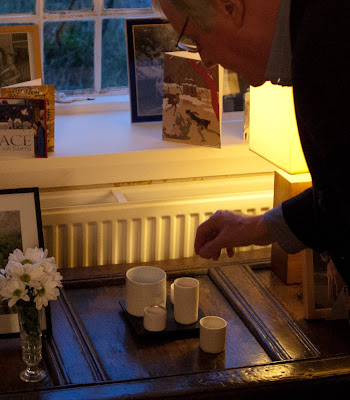 Our friend's Edmund de Waal pots can be rearranged ad lib., which gives him (and others) enormous pleasure. We had a jolly lunch there yesterday. Equally random seems the ability of certain streets to attract wealthy people to live in them.

Back in the mid- to late-Sixties, I shared a flat with Mark Fuller, Geoffrey Tilleard and Hugh Chatwin in Chelsea. It was on the first and second floors of no. 13 Bramerton Street, which runs South off the King's Road, not far down from Sydney Street. Then, with its gay nightclub in the adjoining basement, it really wasn't all that smart a place to live: I guess my rent might have been £6 a week. Now I read in the paper that Bramerton Street is in the top 10 list of dearest addresses in Britain.
Posted by Martin Davis at 19:13

Hello Martin. Happy New Year! My parents 1980 £12,000 house in Leamington Spa is now selling for around £135,000. It was a cold 1930's house (with a 120 foot garden mind you), to think for me it is beyond any financial aspiration. I thought that street was full of the nicest people we have ever lived with.