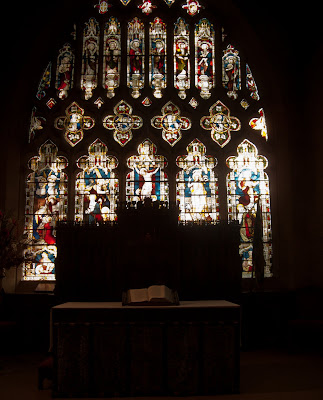 The oldest building in Cheltenham, St Mary's, is hosting a Festival of the Book in parallel to the LitFest. An exhibition in the South Aisle chapel commemorates the 400th anniversary of the King James Bible, from which readings are being made from lecterns in the nave, day by day by teams from 16 of Cheltenham's many churches. Yesterday morning, it was my turn (with three others) to tackle the Book of Job.

I've always found it rather forbidding, but read aloud Job makes much better sense, and aren't there some wonderful phrases! "God forbid!" "The Lord gave, and the Lord hath taken away." "The sparks fly upward." "The skin of my teeth." "The root of the matter." "Gird up now thy loins..."

It was with some reluctance that I went along after breakfast, but from the moment that my bicycle and I were ushered into the church by smiling stewards, I became glad I had made the effort.
Posted by Martin Davis at 22:09