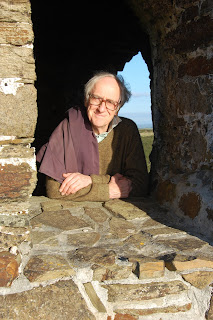 This afternoon, I was looking at this amongst other photographs I had taken during 2010, to select some for our usual kitchen calendar. As I did so, I thought to myself how short life is for some people - and that perhaps indeed it would be so for David. I can't imagine what gave me this idea, as that Michaelmas Day in Cornwall when I took this, just two months ago, he was in prime form - as cadaverous as ever, but enjoying a healthy if quirky diet, and no more stressed than usual about what might become his very own Casaubon delusion.

An hour later came the shocking news that David had indeed died at the weekend. What a friend we have all lost! Others have written more knowledgeably than could I about his originality of thought. You could see him as a curmudgeon if you opposed the invasion of Iraq; or the mad professor if you looked for a practical, straightforward answer to a question. He regularly won the family's competition for most unusual Christmas card. Sir Andrew Aguecheek sprang occasionally to mind, though David was nobody's fool - and never had money enough to match his generosity of spirit. Such a mixture of the extremes of conservatism and radicalism puzzled many, but beguiled our children, who will be heart-broken. And what other economic dictionary offers a definition of "quick" in the biblical sense?

The Iraq conflict re-erupted over supper in our kitchen on 8th October 2005 - between David and his good friend Jonathon Porritt. This photograph was taken a few glasses of wine later. 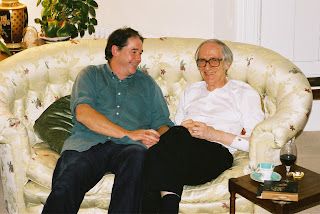